Beneath the U.S. House of Representatives and the Capitol building stretches the impressive Cannon Tunnel. Its walls are adorned with works of art, paintings, pictures and sketches; each carefully selected from students all around the country. This year, as our senators walk through this gallery, one of our own artists’ work is among them. The photo is a vibrant portrait of a regal woman. She sits, impeccably dressed, behind a phone positioned on a ring light. She looks ahead, unsmiling and instills a sense of awe.

Mwibleca is an animated, humorous spirit with a tendency to self-deprecate.  He has a seemingly unending supply of good stories and meets the world with a smile that puts everyone at ease. Only a year ago, he had never even thought of trying his skill with a camera. He moved to Vermont from Tanzania in 2018, and enrolled in BTC’s Digital Media class in 2019, intent on making music.

All first-year digital media students are required to participate in a photography unit. Mwibeleca was reluctant. He wanted to focus solely on his music, but after completing the first photography assignment he started to feel differently.

“I remember that day after school I went to North Beach and just took pictures of birds and showed them to Mr. Jason [Jason Raymond, instructor of Digital Media].” Mwibeleca said. “He said ‘wow, they look pretty good.’ I was like, ‘really?’ He said ‘yes.’ I was like, ‘Wow, then I’d like to take more.’”

Mwibeleca began to carry a camera with him. He experimented with photography, using different subjects and retouching techniques and developed a liking for taking portraits. As he improved, his friends and family began to request them. He never thought of charging for a photo. He didn’t think his pictures were good enough for that. 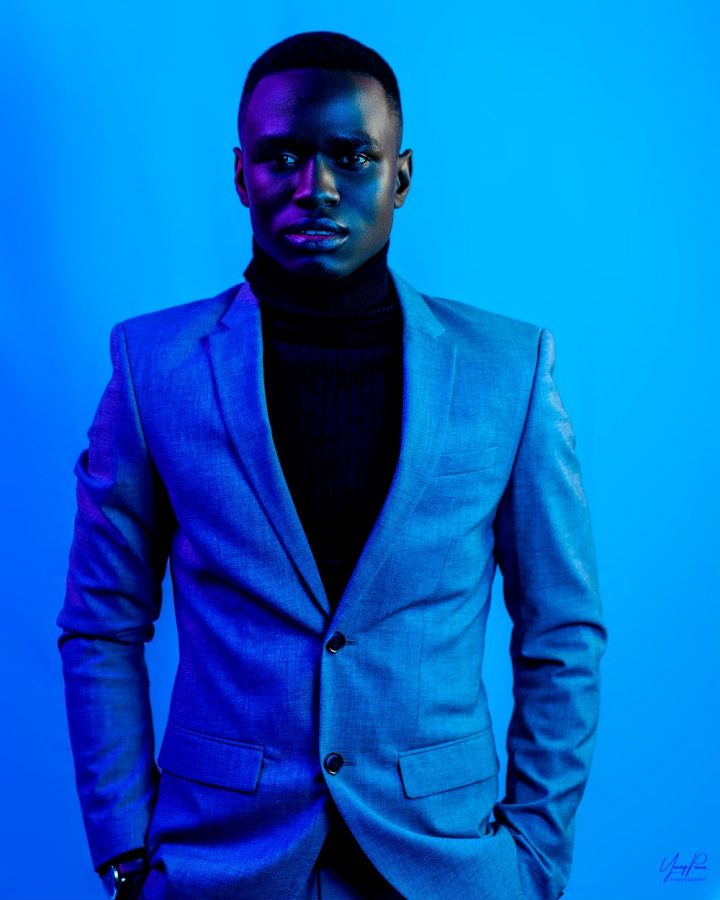 But as Mwibeleca’s skills continued to grow, people outside his inner circle began to request photos. It was his “sister”, Sylvie Abedi, who first gave him the idea of turning his hobby into a business. Abedi offered to be his first paying customer.

“I took… I don’t know, six pictures, and she gave me like twenty dollars.” Mwibeleca said, still surprised by the amount even in his retelling. “[I was] like ‘Really? This is too much.’”

Despite Mwibeleca’s reservations, Abedi convinced him to take the money and encouraged him to seek compensation in the future. In his first year of taking portraits his business flourished. He was overwhelmed by the sheer number of requests, so many, that he had to turn people away, telling them to wait until summer. Over that summer Mwibeleca made enough money shooting portraits to invest his earnings in his own camera, a SONY a7r2.

Armed with his new equipment, Mwibeleca continued to expand his repertoire, taking more photos and adjusting his style as he saw fit. In December of 2020, Mwibeleca submitted two photos to the national Scholastic Art and Writing competition. His first photo, “Sylvi Sunshine” won an honorable mention. His second, “Sylvi” won a Gold Key in the regional competition and was selected as an American Visions nominee.

“[The win] feels really good,” Mwibeleca said. “I mean, it feels more than great. Because when you’re doing something like this and you get this kind of award, it encourages you to do more stuff and be more creative so you can go to the next level. It means a lot to me.”

For the most part, Mwibeleca takes pictures for other people. In doing so he rarely gets the chance to exercise his own artistic vision, but he considers meeting new people and taking their pictures as one of the best parts of photography.

“Most of the pictures that I take, they are not always a story. It’s just like, I’m gonna take this for fun for putting on social media and stuff like that,” Mwibeleca said. “But that doesn’t negate their importance. You might think this is just for fun, but at the end of the day, it means something to somebody. So it becomes a story.”

Mwibeleca wants to continue to push himself in his future pursuits.

“I feel like I don’t know anything yet,” Mwibeleca said. “There’s many ways of taking pictures and there’s many ways of retouching. I just want to go to college and learn about that and videography so I can go to the next level.”

He doesn’t expect it to be easy, but he’s no stranger to the challenges of learning something new.

“Every beginning is hard…” Mwibeleca said. “When I started I was like, ‘What is this?’ You know, I was lost, ‘I don’t even know what I’m doing.’ It feels like you just wanna quit… but I’m glad those people who were close to me were like, ‘You got this. Keep doing it.’”

There is no doubt that those people close to him were right. Mwibeleca’s persistence has paid off in ways no one could have foreseen. The portrait showing at the US capitol attests to that.

More of Mwibeleca’s work can be viewed on his Instagram @pmw.photography_.