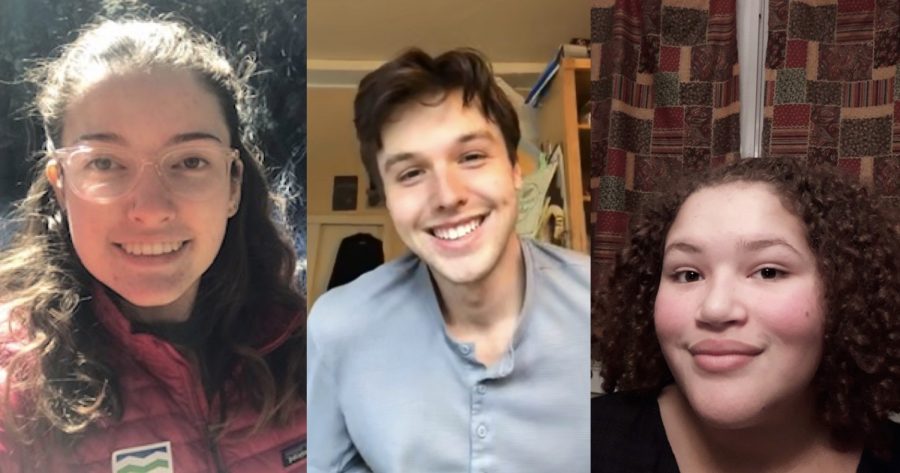 Every Burlington High School (BHS) student is going through the same thing: school closed on March 16, classes have become remote, and our lives have been turned upside down to adapt to COVID-19. At the same time, everyone’s individual experience is unique. I had the opportunity to (virtually) sit down with three BHS students, and document their stories in their own words.

I live next door to essential health care workers who have a four-year-old and four-month-old and they have been going to work, not at high-risk but they just needed help with babysitting. So the past few weeks I’ve been doing a lot of babysitting.

Four months ago they had another child which was pretty huge because at that point we had gotten really close to them and they were basically like family. It just seemed really natural. I think of them a lot as like my second parents. So, for this, it was an awkward but very natural decision to quarantine with them, for at least as long as we could. What ended up happening is, I spent nine days quarantining with them, so I lived at their house for nine days and helped with childcare.

The hardest moment, I remember, was the last day of the nine days and the mom had just worked a night shift so she was sleeping in the house. I put the little boy to bed and I gave him a bath and put him to bed, and all through it we were fighting and he was screaming….After like half an hour of him just yelling about how he wanted to throw bath water out of the bathtub and I’m like, “You can’t do that,” I took him out of the bath and he was screaming about it. I finally put him to bed, and I’m like, Okay *sigh*, and then I’m like, Oh crap, there’s another one, I have to put a baby to bed, So I put the baby to bed and she was screaming her head off the whole time too. Finally she went to bed and I walked downstairs, and this sounds really over-dramatic, but I sat down and I actually started to cry.

No matter how hard it was… it was definitely a net positive. I’m extremely privileged to have that sort of work to keep me out and keep my mind sane. So no matter how difficult it was at times, I always felt lucky to have that.

I never thought of myself as an extrovert. I always had social anxiety and didn’t want to be in big groups and don’t like parties and I just wanted to be home, or maybe with like one other person, so I thought I was like a hardcore introvert. Covid kind of made me realize how much social interaction I need to be functioning and sane.

One thing we started to do together was the trail bike. He would hop on the back of the trail bike which was attached to my bike and we biked around and we had a blast. It was so much fun, like he thought it was so funny when we would fall over…he would just die laughing and that was just so nice to hear from him and to be laughing with him. With Covid and being so sad about everything and then kind of falling into depression, I’m also having these moments just like laying on the floor laughing. He was able to give me those just as much as I was able to give him those, and I think he gave them to me more. That connects back to how lucky I am to have that opportunity.

For me doing school from home is easy because I’ve done that a lot in the past so that wasn’t something I had to get used to. It was just, Oh yeah, I know how to do this now everyone else has to do it too.

I have Complex Regional Pain Syndrome And some other health issues so I was in Boston for about two months doing a treatment program for that and stuff, and pretty much every year I’ve had to miss a lot of school. Starting freshman year was when I kind of got used to that.

In freshman year, when it was a few months, it was definitely the most like this. I wasn’t in school at all, it wasn’t, I’m going to be out for three days and come back, and I know I’m going to be out for three weeks and come back, I knew it was going to be this extended chunk of time. That was very sudden as well. The treatment had a long waiting list, so once a spot opened up they told me on a Friday that I needed to be there on the next Monday. It wasn’t really much time planning and that is kind of what this is like too.

I was doing [treatment] in a whole different environment and I was only doing school for maybe an hour a day, because I had other things I had to do all day. I was doing PTOT (physical therapy) and all these different things. That was my main focus and so I was really busy, and now there’s not much we can do here so that was definitely different.

Right now everyone is doing this so everyone is in the same boat. It is not just me being like, I don’t know what I’m supposed to be doing here, It is a very different feeling, and everyone can relate to what’s happening. If you ask anyone they’re going to be like, “Oh my God yes! This is so hard,” or whatever, and that’s a different thing when everyone is going through at the same time.

I usually wake up mid-morning and I might just hang around and do whatever I want until like noonish and then I’ll usually go out and do some school work, and right now we’re actually moving to a new house so I also do packing.

My mom has been working from home and my dad is an essential worker. He works in a warehouse so he goes out, but at his workplace they wear masks and gloves and have cut back on employees a lot. So mostly my mom’s home all day and my dad works like maybe eight hours a day.

I have been dealing with that okay because when quarantine started he was out of the country so my mom had to work really hard to fly him back into the country. When he got here he was in quarantine for two weeks, he was locked in his room, and he could only come out if he wore a mask. I think I’ve been okay because I know he’s really cautious and I think there are only two or three other people working with him right now.

My dad is much more relaxed about it. He’s known a few people who have [COVID-19] I guess, but his family lives in a country that’s not really affected. They live in Senegal, it’s in West Africa, and they don’t have a lot of cases there. The only cases are really in the capital.

I’d say we’re pretty close, I can always ask him to pick me up from school and stuff, and we like spending time together. Like we might watch a movie or cook something and yeah, I’m pretty close with my dad. I think my dad’s done a ton of impressive stuff in his life, like English was his third language and he works really hard everyday doing manual labor, and I think he always does his best which is something to be proud of.

One Response to “Student stories from quarantine Vol. 1”

If you want a picture to show with your comment, go get a gravatar.