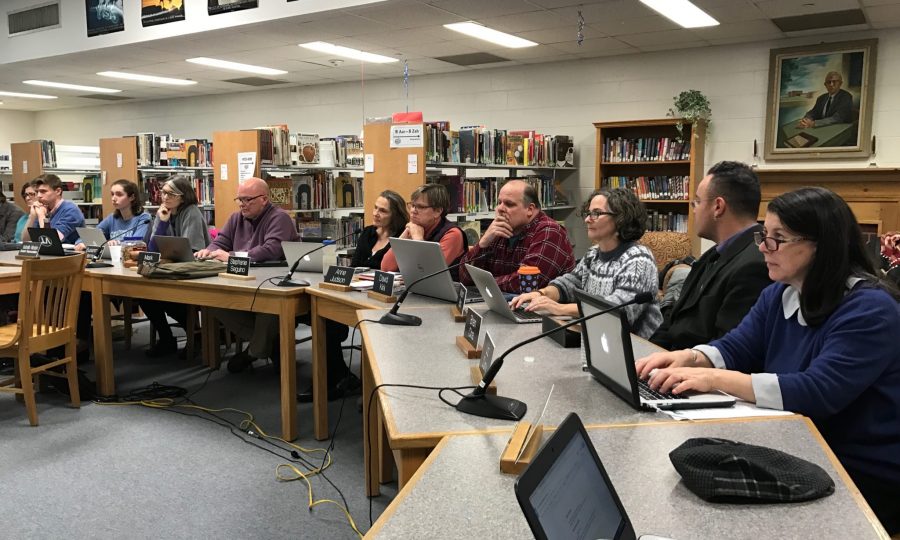 Burlington School Board members voted to adopt a $7M budget for FY18 and put forth a deferred maintenance bond, during a meeting at Hunt Middle School on Jan. 10. | Photo: Alexandre Silberman/Register

Watch a video of the full meeting:

The Burlington School Board voted to adopt a budget of $73.76 million for FY18 at a meeting at Hunt Middle School on Jan. 10. The result is a 6.6 percent budget increase over last year, which will now head to the ballot for voters’ approval on Town Meeting Day.

The district’s process was centered around three “big rocks,” or budget priorities of sustainable finance and facilities, equitable climate and culture, and inclusive teaching and learning. Superintendent Yaw Obeng reached out to administrators who developed proposals based on their needs. He received requests of over $4.1 million, according to a budget presentation by the district.

The budget includes $300,000 for a mandated preschool expansion under Act 166, $150,000 for BHS academic interventionists and $130,000 for librarian interventionists. Middle school teaching staff expenses will go up by $90,000, and an additional $60,000 will be allocated for multilingual liaisons.

Music, art, and physical education all were indicated as areas of preference in a student survey and will receive $45,000 in increases at the high school.

The final budget meeting became a heated debate after Obeng announced that tax estimates were higher than expected.

“It’s not good news for Burlington in terms of the tax impact,” he said.

If the budget is approved, property taxes will rise 5.25 percent, translating to an increase of $235 a year for the median Burlington home value of $231,500.

The board responded to the news by cutting $365,000 from a proposed contingency fund, a budget area for unforeseen future expenses. Ward 6 Commissioner Stephanie Seguino proposed the reduction, which reduces the tax increase from 5.8 to 5.25 percent. She worried that higher taxes would disproportionately impact renters and new Americans.

“If we go too far, we risk damaging our ability to fund things in the future,” Seguino said.

The budget was aided with a $1.1 million surplus from FY16, which allowed the district to set aside $2.2 million in new investments for FY18.

Bob Church, a Burlington Technical Center teacher and the chief contract negotiator for teachers, believes the surplus is a sign of decreased transparency.

“Our original premise [during negotiations] was for our contracts to be in the middle of Chittenden County teachers,” Church said in an interview on Dec. 19. “They kept telling us that they didn’t have the money, and now that they do, that’s a little ingenuous.”

The FY18 preliminary budget became public on Dec. 20 during a school board finance committee meeting at the Burlington School District central offices.

Superintendent Yaw Obeng and Business Manager Nathan Lavery began by explaining the expected revenue sources and expenditures for FY18. The proposed budget includes shifting revenue between funds, including moving driver’s education and ONTOP, a program for students with behavioral issues, to the general fund. This will contribute to a $1.5 million increase.

During the initial Dec. 20 meeting, the superintendent pivoted the discussion to proposed reduction. Obeng told the board and community members that he had difficulty receiving feedback on areas to make reductions. The only suggestion, he said, was central office expenditures. Three percent or $150,000 will be reduced in the approved budget.

The superintendent added that he plans to reduce operation costs through district-wide school supply negotiations. This includes expensive items such as photocopiers, which were normally purchased by principals. The district has started implementing the policy this school year.

Many teachers, particularly at the high school have raised concerns about the need for more multilingual liaisons. In response to those requests, the district plans to increase funding for this program.

Lavery said that the district and school websites will be updated to create improved accessibility of information and transparency. $30,000 will be allocated for the redesign. Many community members have cited the website as non-user friendly and difficult to use, particularly when accessing budget and school board information.

One major concern in the budget development process has been the lack of full time librarians at the high school, the Sustainability Academy and the Integrated Arts Academy.

“We want additional resources in the form of library specialists,” Obeng said during the Dec. 20 meeting.

The district was not clear on the increase in library funding. The position title had been changed to librarian interventionists in the budget, and Obeng said he would like for library media specialists to spend more time focused on individual student academic support.

Fran Brock is a social studies teacher at the high school. As someone who works with students from a wide range of educational backgrounds, the lack of full-time librarians has been difficult for her.

“I don’t have the academic support for my students that I used to have,” she said.

She hopes the district will reinstate library-media specialists for their traditional purpose: assisting with media literacy, research and education.

“Historically, libraries prove to be the most democratic institution that a society could invest in,” Brock said. “They keep talking about equity, yet the one place that would create it they’ve torn apart.”

The board then moved on to present position increases at every education level in the district. The high school will see an additional two full-time equivalent positions, and the middle elementary school levels will receive an increase of one each. The budget for BHS was determined based on a projected FY18 enrollment of 986 students, according to Obeng.

The Dec. 20 budget presentation was followed by the public comment period. Many community members expressed the need for the restoration of full-time librarians at every city school.

“We absolutely need to be able to serve our students full-time,” Sharon Hayes, a librarian at the Sustainability Academy told the school board.

The need for social workers and increased class sizes were other concerns. Joanna Grossman, a Champlain Elementary School parent, said that their principal was spending over 50% of her time on disciplinary issues.

Several community members expressed the need for the restoration of paraeducators at the kindergarten level. Obeng said that school administrators had not indicated this as a priority during the information gathering process. During the Jan. 10 budget meeting, Commissioner Kathy Olwell asked the superintendent for a cost estimate, which he was unable to provide.

The school board presented the budget to the Burlington City Council on Jan. 9. Councilors posed questions to Obeng and Lavery regarding the services provided, in addition to the impact on taxpayers.

“Weigh what the needs of the student are with what the taxpayers can afford,” Ward 4 City Councilor Kurt Wright told district leadership.

Councilors also asked for the number of staff reduced during last year’s budget cuts. Obeng responded by saying that despite issuing 24 reductions-in-force, individual notices of a potential layoff, only about 4.6 cuts were made.

Lavery outlined during the meeting that pending contract negotiations for FY18 could alter spending. He said that each one percent staff salary increase costs the district approximately $500,000 in expenses. The board accounted for a 1.5% salary increase in the approved budget, or $750,000.

The teachers’ union and board have not yet exchanged proposals, according to Burlington Education Association President Fran Brock.

“When districts are engaged in negotiations, those talks are rarely if ever completed before the March Town Meeting Day budget vote,” she wrote in an email. “Yet every district — including Burlington — has always been able to project increases required for employee compensation to include in the proposed budget.”

Marty Spaulding, the district’s property services director, presented to the city council about deferred maintenance, the practice of postponing repairs to save costs. He told the council that the district is in need of $39 million for this practice, which will take place at all schools except for BHS.

To fund the deferred maintenance, the district will be asking voters to approve a $19 million dollar bond on Town Meeting Day. For the median Burlington home price, taxes will increase by $8 per month or $90 per year, according to Spaulding. The bond item was approved by board members on Jan. 10.

In the meantime, the district plans to establish a committee that will review necessary changes at the high school. The funding for this would come from a bond at a later time.

Priorities within the district for capital improvements include BHS accessibility planning, an intercom safety system, a parent drop-off area and second-floor window repairs at Champlain Elementary.

Have an opinion on the budget? Send us a letter to the editor at: [email protected]