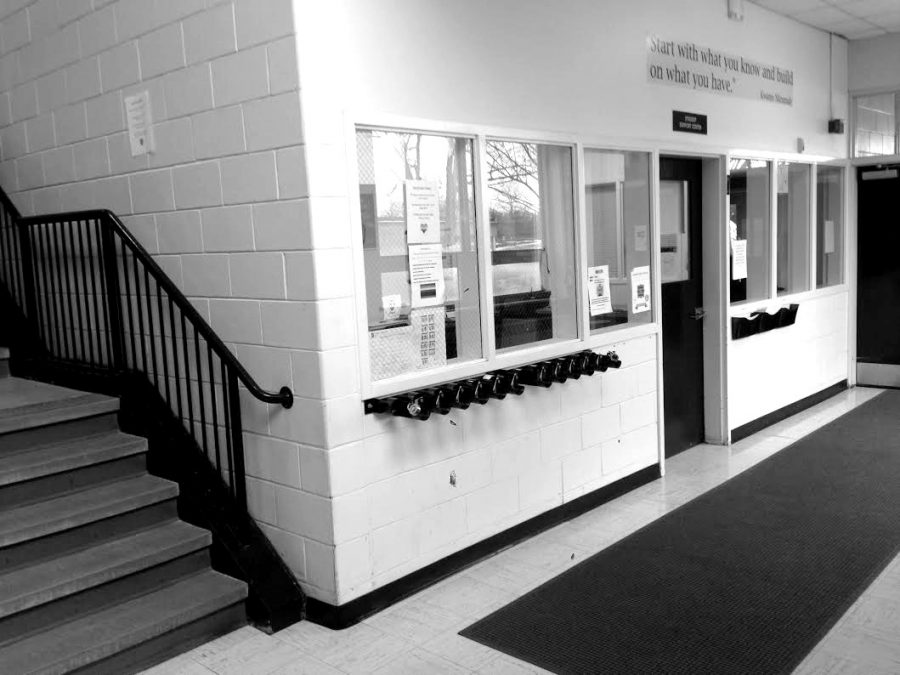 Days of writing on a chalkboard for punishment are over. Burlington High School has transitioned to restorative practices for a five-year pilot program.
Restorative practices are an alternative method of dealing with issues and working with the people involved to solve them through communication and collaboration. They are used at Burlington High School as a method for students who have had conflicts in the community with other students or teachers in class to solve them in a more engaged and personal way. Rather than being stuck with the punishment of an in-school school suspension and really no way to solve the problem, students are encouraged to resolve problems in a proactive way.

Jesse Cope is another Support Center staff member who plays a similar role to Ms. Hoyt in helping students be restorative.
When asked whether he thought there were any negatives to restorative practice he responded, “No, it’s all positive.”

The Support Center is an area for students and teachers to visit when they encounter problems with one another.
The Support Center was brought in with the restorative practices pilot two years ago and replaces the Alternate Day Program or ADP system our school previously had, and is located to the right of the exit of the building A to building B connector.
Prior to coming to Burlington High School, Assistant Principal Noel Green was the principal of a school which implemented restorative practices in Baltimore. Green is part of the pilot team and works implementing restorative practices into the school through teacher training, student input, and goal setting. He is helping to prepare the system to be implemented into the district once the pilot program ends.

Students who have broken rules go through a restorative process which puts emphasis on the relationships and people which have been harmed. It also gives a voice to the student and the person who has been harmed in order to improve clarity where it is often needed.
“Students do well when they can. Typically if a behavioral issue is happening in class there’s something else going on. We really try to get to the root of what’s actually going on. Students will succeed in school when given the support that is needed,” Hoyt said.
The process to amending a violation of a rule goes as follows: A staff member will sit with the student who has broken a rule. First the student is asked how they were feeling during the incident, then they are asked who their actions affected others and their relationships with those people, and finally what they can do to make amends.

The length and impact of restorative practices vary based on the severity of the infraction. Infractions range from cursing at a teacher, or speaking while another student is speaking, to possession of drugs or a weapon.
For more serious infractions, such as suspected possession of a weapon or drugs, administrators and the Student Resource Officer will refer the case to the Community Justice Center. The student will then spend the rest of the day in the Support Center where they get help from staff to set up their meeting with the liaison from the Community Justice Center. At that meeting a three step contract is agreed upon: for the student to make amends with others, the community, and lastly for learning opportunities for the future. These steps vary greatly between cases but the general idea is to mend relationships and grow from the process.

The students will be assisted in this by staff of the support center, such as Ashe Hoyt and Jesse Cope. Once everything on the contract is resolved, all participants will sign off and the case will be closed.
A major infraction on one’s permanent record can have a huge negative impact on their life, using restorative practices students can take measures to amend what they have done, and avoid having such a blemish on their record.
There are some challenges with this system and its implementation into Burlington schools. While the pilot program has been very successful in implementing restorative practices through communication and student driven restorative actions, the Support Center could use more staff and resources.

“I think that a drug and alcohol counselor, as well as another social worker would really improve the program. It’s shocking to me that we only have one social worker in the whole school. It would benefit us to have more one on one with students,” Hoyt said.
Another difficulty with implementing restorative practices is that people feel that there are no consequences to actions. However, that is a misconception, there are still consequences. It’s just that students are given the opportunity to amend their actions and show that they care about them.
“Restorative Practices are things that people do all the time but I don’t think that they see the term, like if you have an argument with a friend, and you guys decide to sit down and talk about it and express how you feel about what happened, that’s restorative,” Green said

.
Another challenge with restorative practices is that it seems like a new idea and system. In reality it’s not new to most people.
“It’s consistent with anything that’s perceived as new, people are fearful, hesitant, we try to assure people that it’s not a new program or a new thing. It is a way of thinking. It is a way of building and repairing relationships. That is not a new concept,” Green said.

What are your thoughts on the implementation of restorative practices? Post a comment below or send us a letter at: [email protected]