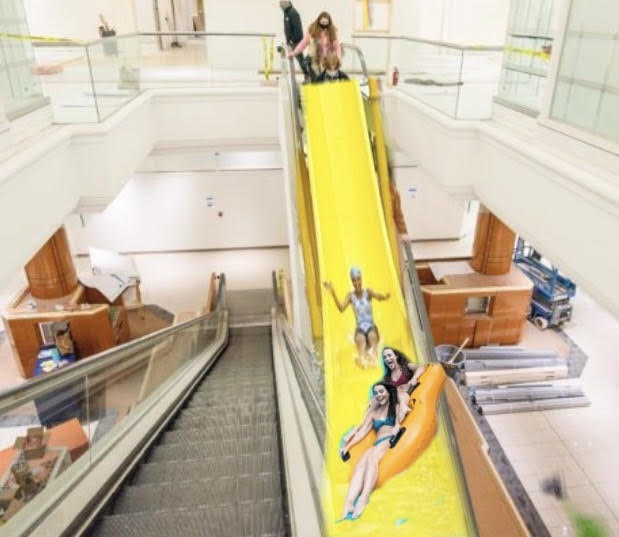 Due to the continuous technological failures of the DtBHS escalators, the school board voted on Tuesday to budget 1.2 million dollars to install a water slide.

Students report the slide is making them late to class.

“Not that I don’t like the waterslide,” Bob Walter ‘24 said. “But it’s definitely inconvenient to have to change in and out of my bathing suit every time I have to go downstairs. I’ve received detention twice already.”

In an effort to combat this, administration has changed passing time from 5 minutes to 15. Despite their effort, students keep coming to class late.

“It’s so much fun,” Lily Harris ‘24 said. “I keep skipping class because after I slide down, I just want to go back up and do it again.”

Students’ feelings towards the new development are mostly positive. Arnold Brown ’22 reported that he used the waterslide a staggering 34 times in one day alone.

Some students are now satisfied with remaining permanently in the renovated Macy’s.

“It solves two problems, first, we can use a waterslide whenever we want, and second, the 200 million dollars that were budgeted to build the new school can now go to something more important, like solving world hunger,” Harris said.

Although no fatal injuries have been reported, the school nurse continues to worry about the increasing number of injuries.

“I just broke my elbow,” said Owen Thompson ‘23. “I won’t go down backward again, I promise, I just don’t want my waterslide to be taken away.”