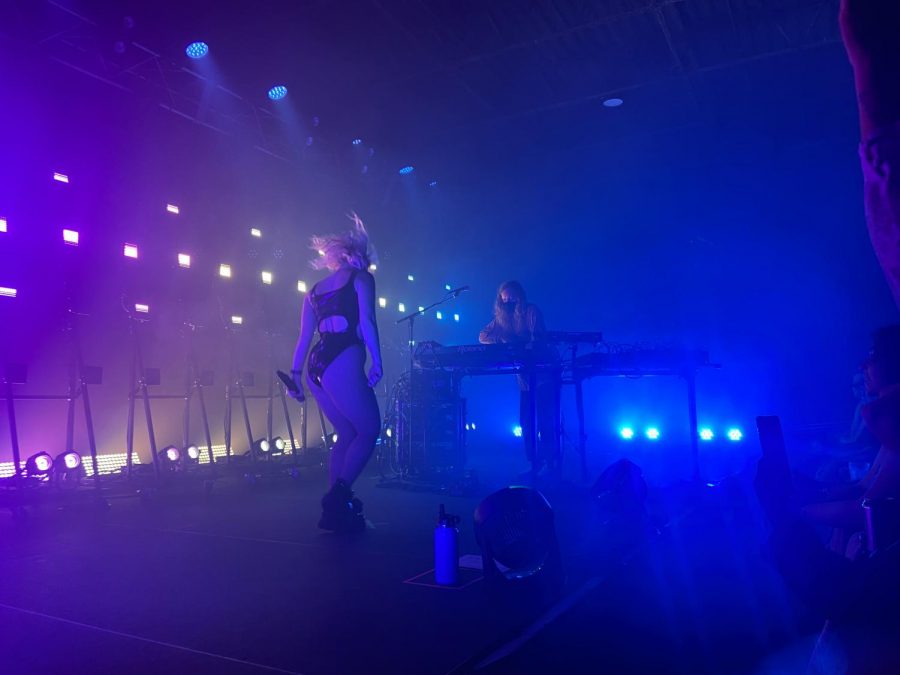 On November 10, Higher Ground opened its doors to hundreds of people. They were all piling in to see Sylvan Esso, an electronic pop duo made up of Amelia Meath and Nick Sanborn. The duo, which I was mostly unfamiliar with prior to the concert, put on an incredible performance. Both seemed thrilled by the opportunity to perform live, and their excitement and joy was passed to the audience with each song.

Even before the concert began, audience members had already started to shift towards the front of the ballroom, dancing to the music playing softly through the room’s speakers. This was my first concert in nearly a year and a half, and the building energy in the room seeped into my veins. My eyes were wide and reflected the bliss in each face I passed.

Sylvan Esso’s opening artist, Colombian Canadian singer-songwriter Lido Pimienta, began her performance a little after 8 p.m. She wowed the audience with stunning vocals and energetic dancing. She gracefully weaved witty remarks into her performance, with topics ranging from abortion rights to stories about her life in Toronto, Canada. The remarks made her appear confident, warm and friendly, increasing the lively atmosphere in the ballroom.

As the staff began to clear the stage, a stagehand flicked the smoke machines on. The audience murmured with anticipation and impatience as they waited for Sylvan Esso to perform. The smoke crept into the audience, making our eyes burn. Although the barely visible stage made for a compelling visual, the build up dragged on a little too long and decreased the energy in the room.

After nearly fifteen minutes, Nick Sanborn finally stepped onstage, taking his place behind a massive synthesizer. Amelia Meath then made her entrance. Dressed in a large, loose, purple top and a leotard, Meath’s more extravagant outfit made an intriguing contrast to Sanborn’s more casual presence behind the keyboard. Her voice echoed in the darkness as she began to sing the duo’s first song of the night, “Runaway”. The song highlighted Meath’s vocals and range. She belted the low notes with ease, and the higher notes throughout the chorus were met with equal effortlessness. Sanborn pounded out an electronic beat on his synth that encouraged the audience to dance along. The song restored any energy lost in the long interlude between performances.

Right from the get-go, Meath engaged with the audience, whose energy and excitement had only risen since the duo stepped into the room. From every angle, hands reached up towards Meath and waved in the air, as people danced in a giant, moving mass.

Throughout the performance, neither Meath nor Sanborn engaged in much conversation with the audience. They let the music speak for them, only stopping every now and then to express their gratitude and excitement for the crowd’s presence.

The group’s two most popular songs, “Die Young” and “Coffee”, were both met with loud, raucous enthusiasm from the audience. “Die Young” is a catchy and repetitive track. Every voice surrounding me shouted along to the chorus line “Now I gotta wait for you honey”. “Coffee” is a bit slower, but when the song reached its second chorus, Meath pointed her microphone to the audience, encouraging their sing-along to grow in volume, until everyone around me was screaming the lyrics. Songs that were less well-known were met with an equal level of energy, if not an equal level of lyrical knowledge.

Finally, Meath and Sanborn exited the stage, and the audience was plunged into darkness. They waited for the house lights to come on. But instead, the two took the stage once more. The encore was met with a level of joy that matched, if not exceeded, the level of energy that had been ongoing throughout the entire night. The duo performed their final number, “Radio”, before exiting the stage.

Sylvan Esso created a performance that was thrilling and invigorating, leaving the audience beaming. The performers gave their all, and it truly paid off. It was, in my case, the perfect return to live concerts.