Aria Batten Unmuted: What it’s Like Coming Out as Transgender in a Pandemic 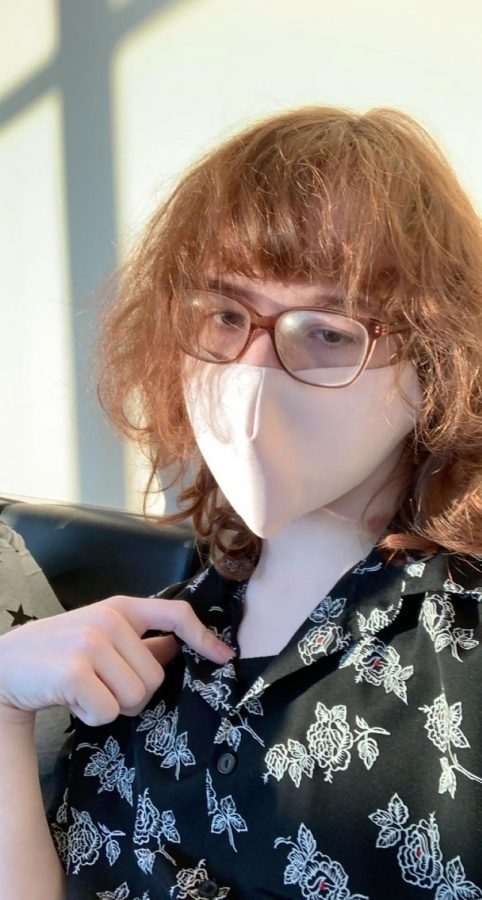 In November, when BHS began offering in-person classes at Edmunds Middle School, Batten attended at first. Soon after, she stopped reporting in-person and only went to her online classes. This was only partially due to Covid-19 cases. Mostly, her lapse in attendance was due to misgendering. Misgendering is when someone refers to anyone using the wrong pronouns or title.

“It’s not the fact that my mom just doesn’t want me to go [back in person] yet,” Batten said over a Google Meet in mid-February. “It’s because [of] getting deadnamed and misgendered at school because I didn’t have the opportunity to tell people for the first four months of school that I was trans.”

During online classes over Google Meets, Batten would keep her camera and microphone off, and recalled being misgendered by some of her teachers.

“I don’t want to interrupt [to correct teachers],” Batten said. “Interrupting online, it just feels different, because I have to unmute myself.”

Batten also felt there was a lack of options for people to display their personal pronouns in Google Meets, an option that other video conferencing apps, like Zoom, have.

“Even though I’ve specified that I’m trans, sometimes I’ll still get misgendered in class, and they’ll be like “Oh, I didn’t know”, and I’m like, ‘ugh,’” Batten said. “It’d be nice if [Google Meets] had that option. Especially with the fact that the only thing that [teachers] get to hear from me is my voice, and so, they just haven’t gotten used to the fact that girls can have much deeper voices than they thought.”

Batten attends some of her classes with fellow students who she is aware may not support her. Even though she still feels safe in BHS and Burlington, interacting with these peers makes her uncomfortable.

“It makes me very anxious,” Batten said. “I can handle a confrontation, but it makes me very uncomfortable that I can just have my entire existence debated.”

In September of 2020 after classes had resumed, Batten wanted to change her name in the school system to ‘Aria’. Batten reached out to her guidance counselor, then the tech department, and then, “anyone she could”. Batten said she did not hear back for three months.  She received a response saying they had forgotten and that they would continue to work on her case. Batten thinks it should’ve been easier.

There are two types of name changes in the guidance department: one is for legal name changes and one is for those who have not legally changed their name. Legal names are stored in a seperate database when a student starts to use a new name for school records, testing, and other academic reasons.

In Batten’s case, her name change was not legal. Batten’s deadname being somewhat public in the school made her uncomfortable, as many of her peers could have seen it . A deadname is usually very private information, and being referred to by an incorrect name is an unfortunately common and distressing experience for many transgender people.

“The fact that some people learned [my dead name] is just really upsetting, I guess,” Batten said.: “Because of the lack of action on the school’s part … if people that are mean know that my deadname gets to me, there are going to be people that use it against me.”

As of Fall 2020, the school now has a system in place for students looking to change their name in the school system. Typically, a student will meet with their counselor, “determine the nature of the change”, and the counselor will fill out a form to make sure all the different areas of the name change are covered and then, finally, confirm with the student.

“It does not seem like [the school] cares at all,”  Batten said. “And, I think that just goes as a whole for the entire LGBT community–like they don’t really teach about us.”

Since returning to school in person at the new Downtown BHS, Batten says things haven’t gotten better. In fact, she says, they have gotten much worse.

“[The misgendering] feels annoying, especially for the teachers that haven’t known me as anyone else.” Batten said.

Despite the experiences Batten has been through with misgendering and deadnaming, she still feels safe at BHS and in Burlington as a transgender student. She says her teachers try their best, but don’t have the opportunities or resources to make classrooms as comfortable for transgender students as they could be.