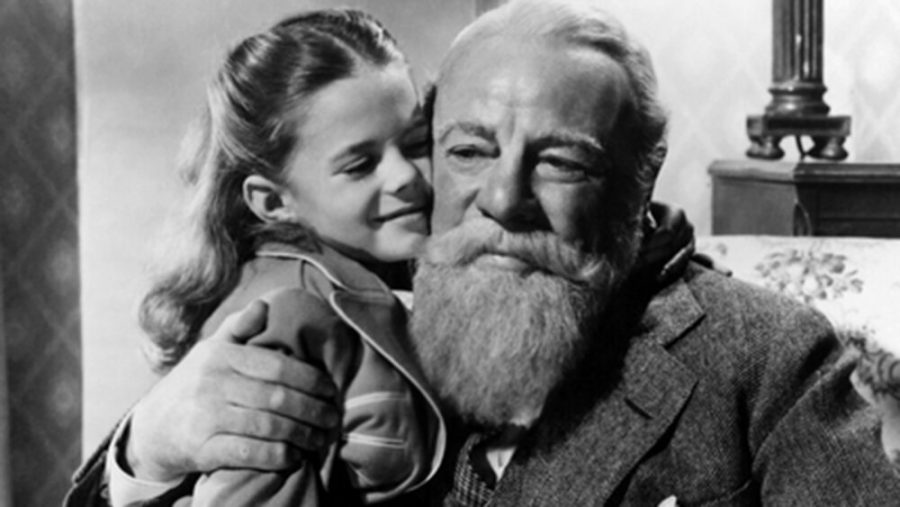 This February, the dingy vacant Macy’s building once filled with fluorescent lights, mannequins, and perfume counters will become the temporary new home of BHS. As department stores all across the nation are shutting their doors, unable to keep up with major online competitors, and in our case, opening them to PCB-displaced high schoolers, it is hard to imagine a time when these dinosaurs ruled the retail world. Miracle on 34th Street, written and directed by George Seaton, invites you into that world to experience the magic of Macy’s in its heyday through the story of a seasonal Santa, who just perhaps may be the real thing.

While the film was released in 1947 (in May, oddly enough), in 2020 it holds its own. It still works 73 years later because it does not oversimplify relationships, motivations, characters, or right and wrong. Other than one despicable minor character, there are no villains. Everyone is in some way flawed and no one is heroic. The characters grow not by fundamentally changing who they are, but by learning how to let the best parts of themselves shine through. Perhaps especially after this disastrous year we have all just gone through, Miracle on 34th Street is a needed reminder that we can find magic not by escaping reality, but accepting it.

There are certain formulas and tropes that define the “Christmas” genre and Miracle on 34th Street has all the ingredients of cliché Christmas schmaltz: a city-living woman driven by work who has forgotten the true meaning of Christmas learns how to have faith with help of a man and a little Christmas magic.

Miracle on 34th Street takes these tired clichés and transcends them.

The story follows Doris Walker (Maureen O’Hara,) a Macy’s executive in charge of orchestrating the annual Thanksgiving Day Parade. Doris, a divorcee, and her six-year-old daughter Susan (Natalie Wood) live alone. At the time this was a radically positive portrayal of divorce and was responsible for the film’s negative B-rating from the Catholic Legion of Decency. Doris is pragmatic and cynical. She sets realistic expectations of the world, and passes these attitudes on to young Susan to protect her. She is a working woman and a single mother in a high-power job in the ’40s. We understand she teaches Susan not to believe in Santa or fairy tales not because she is a bad mother, but because she is a good one.

Fred Gailey (John Payne), a sharp young lawyer who is her upstairs neighbor, fancies Doris and begins to win her over by spending time with Susan. In vain, he encourages Susan to adopt a more child-like view of the world, filled with fairy tales, make-believe, and yes, Santa Claus.

On the day of the Macy’s Thanksgiving Day Parade, when the Santa hired is in a hilariously drunken state, a short old man with a long white beard (Edmund Gwenn)—who we will later learn goes by Kris Kringle—is offered the position. He delivers such a convincing performance, Mr. Macy himself insists he is hired as the season-long Santa.

Through Kris’ influence, we see the lives of all those around him transform for the better. He has this light within him, and his magic is that he brings out the same light in others.

This power is exemplified in a beautiful scene which brings me to tears every time. A recently-adopted Dutch orphan, waits eagerly in line to see Santa. Her new mother apologetically tells Kris she has explained he would not be able to understand her, but she could not dissuade her. Kris welcomes the girl up on his lap and starts enthusiastically chatting and singing with her in Dutch. The little girl’s face lights up with a missing-toothed ear-to-ear smile of pure joy.

The adoptive mother, like Doris, was skeptical out of a realistic fear her daughter would be let down. As the audience, we share that skepticism and the scene’s beauty comes from all of us being proven wrong. It shows how faith and cynicism can paradoxically co-exist. Ultimately, the growth in Doris, Susan, Mr. Gailey, and every other character who encounters Kris, happens not when they reject their cynical views but when they learn to have faith anyway.

Doris and Mr. Gailey fall in love without him having to change her.  Instead, his naivety and Doris’ sensibility provide balance. Doris learns how to look beyond “her silly common sense” but still keeps her high-profile job and does not have to fundamentally change who she is to find happiness.

This Santa Claus is unique in that he never actually gives anyone anything; he simply inspires others to take action. He recommends parents go to other department stores (even Macy’s arch-rival Gimbels!) to buy the perfect present, but he never actually buys any. The few gifts he appears to give directly (an x-ray machine and a house), he in fact has others to purchase for him. It is never established whether Kris is actually Santa Claus, or as Susan questions, “just a nice old man with whiskers.” The film deliberately leaves the answer vague, though the director himself believed Kris was not in fact Santa.

But he was wrong. Santa Claus exists not as a physical being, but as an ideal with countless interpretations across the globe; he embodies the spirit of Christmas and spreads a sense of magic, excitement, and goodness. This is what Kris does. By helping parents find where to get presents for their children, the children get their presents. By putting on a red suit and embodying the character, people believe in him. By interacting with the world with kindness, decency, and a little twinkle in his eye, he brings out the kindness, decency, and twinkle in others. That is what Santa Claus is.

At the end of the film the characters and audience alike are left wondering whether Kris is Santa or just a delusional old man. He is not one or the other, but both.

The answer is faith, but it is not blind faith. The beauty of Miracle on 34th Street is it does not resolve contradictions but embraces them. The director is cynical, the audience is cynical, and every character is cynical—yet sincerity and hope still come through, miraculously.