The Show Must Go On: Theater During a Pandemic 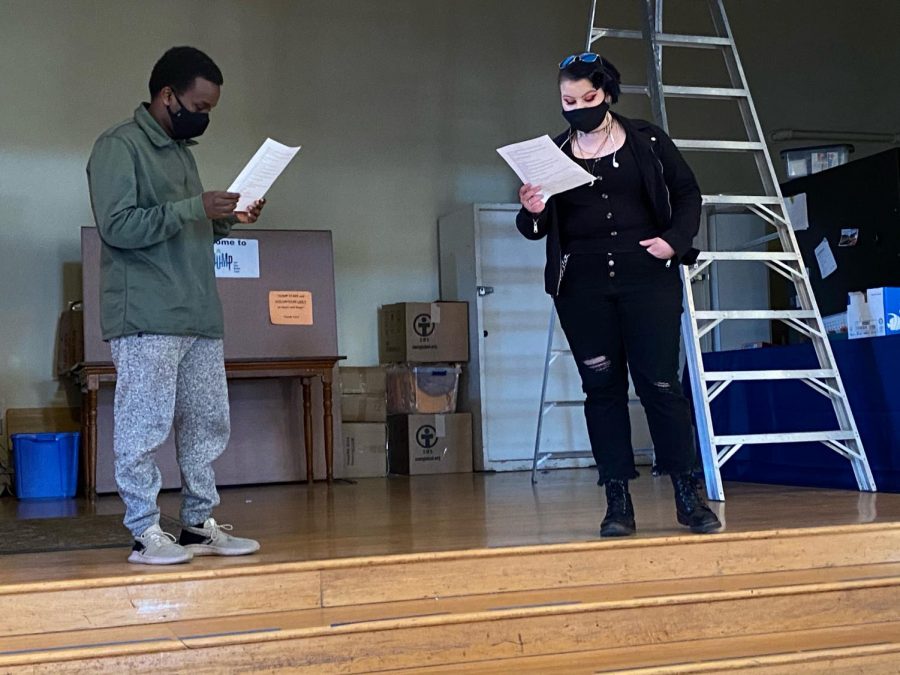 BHS students audition for roles in the One Act Festival presented by the BHS Drama Club. Courtesy: Colby Skoglund

Whether on stage performing, behind the scenes doing prop work, or in the audience, each year the BHS community looks forward to the Drama Club’s productions. The fall musical is the main event for the Drama Club where they often have upwards of 50 students working on the play.
This year, due to Covid-19 and PCB levels, the Drama Club was unable to have their Fall Musical.

Instead of just leaving the drama students with nothing to do, Tammie Ledoux the new director of the Drama Club, and Colby Skoglund, the Lighting and Design Director, gave students a chance to learn new skills they might not have learned otherwise.

“We have a few goals,” Skoglund said. “One goal is to get students together, to have a forum where they can be together with common interests that are their Drama Club members or they’re interested in the Drama Club. Two, to learn some skills, so a wide range of workshops to expand their knowledge. And then three, is to make a more welcoming place for our incoming ninth graders to learn more about the Drama Club, more about the people in the Drama Club.”

During the first semester of the school year, students were invited to join workshops hosted by the Drama Club on Thursdays at Hunt Middle School. These workshops included “scary makeup”, tap and jazz dance lessons, and a class on monologues. Ledoux said that not only does this give the students a learning opportunity, it gives them a chance to build as a community.

Like many clubs at BHS, drama is a social club. As many have found out in the past year, this is difficult to mimic through a screen. The workshops were a break from isolation.

“It’s supposed to be a low-stress sort of a one and done type of activity,” Skoglund said. “There’s no preparation by the student. . . there’s no memorizing lines. You’re not committed to multiple rehearsals. If you can attend, great; if not, maybe you can next week.”

Ledoux believes that students are meant to be able to be themselves in a community of people who fully accept them. It may even help kids discover new things about themselves.

“Through the theater program I found my voice,” she said.

Unfortunately, because BHS students have not been allowed to use their theater, finding a consistent place to hold the shows has been a challenge. The hope is that Hunt Middle School would continue to share their space for The One Acts this February.

“For students we’ve had since their ninth-grade year who consider that theater space theirs in a way, that’s more difficult because they’ve made those connections . . . At the same time if you’re a brand new student you’re looking to make connections and you know that’s got to be scary too,” Ledoux said.

Ledoux and Skoglund are planning on students being able to perform The One Acts in front of some sort of audience, though it won’t be the same. The plan is that students will be able to perform live for a few family members sometime in February. These performances will be filmed and composed into a short film for others to see before February break.