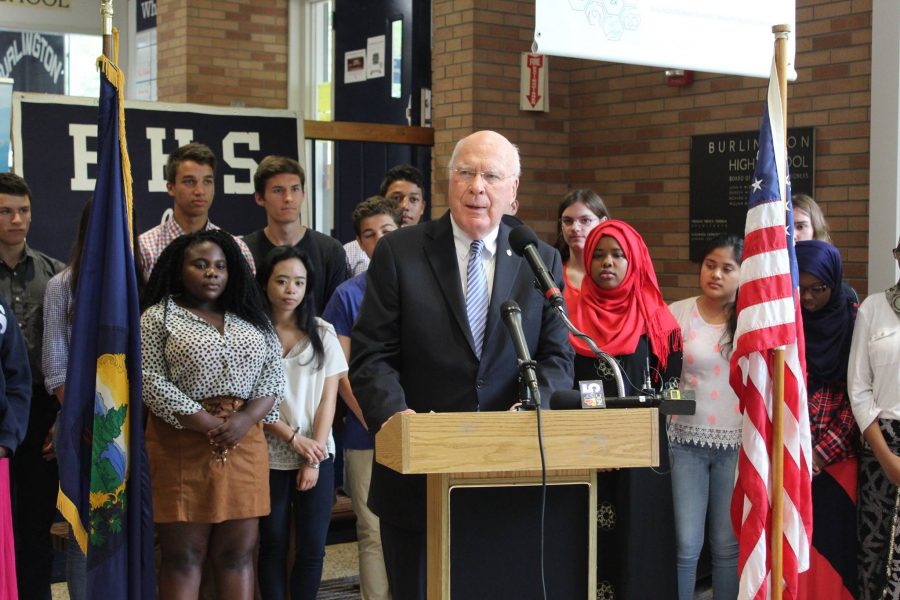 “This grant is great news for Vermont students and their aspirations to continue their education,” said Scott Giles, VSAC president and CEO in a press release.

The six-year grant obtained by Vermont’s congressional officials will fund Talent Search, a college-readiness program that works with over 1,000 students per year. Last year, over 83 percent of Talent Search participants who graduated from high school chose to go to college. The program has been hosted by BHS since 1969 and works with 40 schools, according to the release.

The nationwide program is funded by the U.S. Department of Education.

“It’s quite an honor to host this announcement with Senator Leahy and the representation of delegates from Vermont and VSAC,” said BHS Principal Tracy Racicot.

The senator took the podium flanked by a smiling group of students to commence the event. He described how his youngest son, Mark, was a BHS graduate, who joined the Marine Corps and later attended the University of Vermont.

“We know how a college degree can transform the lives of students and families,” Leahy said. “But we also know how hard it can be to get one sometimes, because of cost or family circumstances.”

The senator’s new grant funding will be essential in helping to make college a reality for disadvantaged Vermonters. Leahy himself was the first in his family to go to college.

“I remember what it was like, on my first day walking onto the campus at Saint Michael’s College,” he said. “I remember the pride in my parents that a Leahy was going to college.”

Leahy pushed the important of college education for the future of the state.

“If they succeed, we all succeed in Vermont,” he said.

BHS Senior Kujtim Hashani began working with his counselor Nancy Schwartz when he was a student at Hunt Middle School. Known in the community as a star player on the BHS basketball team, Hashani has a 3.8 GPA and plans to study business. His brother is now attending college thanks to the help of Talent Search.

“I’m so thankful for what this program has done for me,” Hashani said, addressing the crowd. “I don’t know where I’d be. I don’t know how I would do it. And I don’t know who would’ve helped me if it weren’t for Talent Search.”

While organizers waited in the lobby for the senator to arrive, Scott Milne, Leahy’s Republican opponent for reelection, held an impromptu press conference outside the football field. Milne stood behind his makeshift podium, calling out a lack of transparency by Leahy regarding the EB-5 visa program.

Throngs reporters and news cameras hurried from Milne’s event at Buck Hard Field up to the lobby for a reaction from Leahy. Shrugging off questions regarding his rival, the senator made his way over to chat with BHS teachers.

Leahy responded by describing how diverse the school has become.
“It’s really incredible,” he said.