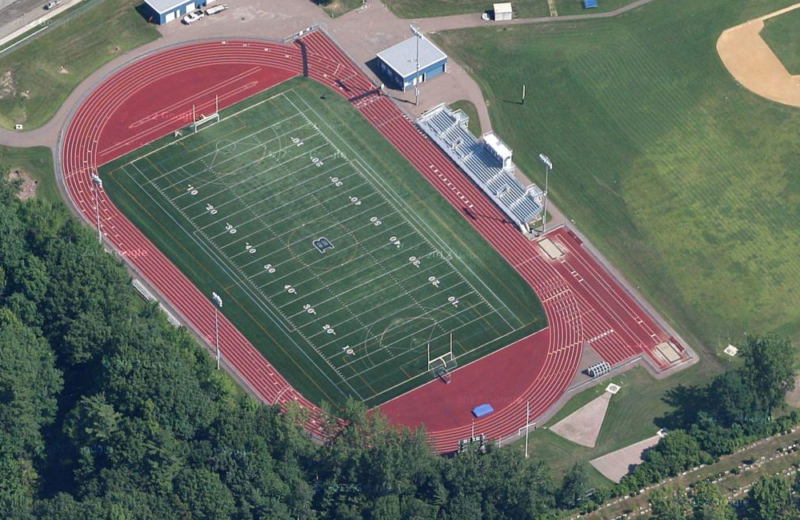 A picture of a sign that was posted on social media during the homecoming football game between Rice Memorial High School and Burlington High School on Sept. 9 has stirred controversy.

The image was widely circulated on social media and has provoked a discussion about possible racial undertones. The sign was created by a Rice Memorial High School student. A Rice administrator saw the poster after it was brought into the game and told the student to put it away.

The incident was not drawn to public focus until images were posted on Snapchat and Instagram.

The sign was the second of two incidents during the game. A fight broke out behind the bleachers between a white family and a group of middle school students, who were mostly black. The Burlington Police Department responded to the scene after school administrators and spectators broke up the fight. The conflict involved punches and the calling of racial slurs, according to a police report.

Police have determined that the incidents were not connected. They are both under investigation.

The Burlington School District issued two statements regarding the first incident, saying that the sign had “the potential to incite violence.” The district contacted the Burlington Police Department to investigate the situation and calm tensions, according to a news release on Wednesday, Sept. 15. The Rice Memorial High School students involved in the incident have been identified.

The district thanked students for not retaliating in the statement.

“Most importantly, we are proud of our student body and community, who notably did not participate in the incident and maintained composure throughout the game and beyond.”

The district changed its position regarding possible racial intent between the two press releases. The first release on Tuesday, Sept. 13 stated that “police have determined that this is not a racial incident.”

The second update, released the following Wednesday, quoted Burlington Police Chief Brandon Del Pozo, who called the sign “deplorable” and said it “reeks of racism.” The district also noted in the statement that the incident has not been deemed a hate crime.

Burlington School District Superintendent Yaw Obeng has been in contact with Rice administration and is working to determine the next steps to addressing the situation. Rice has met with the students involved and is deciding a course of action.

“The community of Rice Memorial High School apologizes to the students, families and staff of Burlington High School,” she wrote. “It is our intention to utilize this moment to shift how we understand good sportsmanship, and create healthy competitiveness between our schools, while honoring the dignity of every human being as brothers and sisters in Christ.”

Della Santa declined to comment further until she meets with BHS administration about putting a plan forward. BHS Principal Tracy Racicot was not available for comment before the Register publication deadline.

An article posted on WCAX.com spurred heated debate amongst students and community members over the possibility of racial motives or intentions in the sign. Over 48 comments had been posted as of Thursday, Sept. 15, including dozens on the organization’s Facebook page.

This article first appeared in print on Sept. 19.