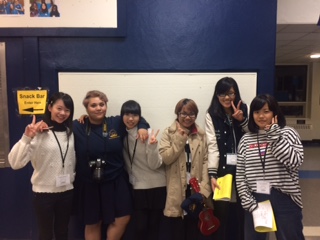 This Saturday, Oct. 29, Japanese students arrived at the Burlington Airport tired but nevertheless in good spirits. After traveling the long distance from Japan to Detroit and Detroit to New York, their New York to Burlington flight was canceled. Stranded in New York City, they stayed the night and caught a flight to Atlanta, Georgia and from there they finally made it to Burlington, Vermont. Exhausted from their long travels they went home with their host families.

These students are traveling through a program called Green Across the World or GATW. The program is paired with Essex so both BHS and EHS can participate. In Japan, there are around six high schools that are participating in this program. The Japanese students will come to Vermont in the fall for 10 days and then in the spring BHS and EHS students will have the opportunity to travel to Japan.

My family and I are hosting an exchange teacher. Her name is Kyoko Sasagawa. She’s 54 years old, and a mother of 3. Her oldest is a girl who’s 24 and her youngest is a boy who’s in 10th grade and 16. Sasagawa came as a chaperone for the Japanese students.

Having arrived late Saturday night, our night remained mellow as we drove her through the streets of Burlington that led to our house. Having shown her UVM and Church Street, she awed at this different culture. A cup of coffee and a meal allowed for some time for talk. We learned about her life back at home and she asked questions about our life in Vermont. We learned that Sasagawa was an English teacher back in Japan in a city in Tottori Prefecture. Her eldest daughter works in a stationary shop and her son of 21 was a student studying physical therapy. Her youngest son is still in high school.

The second day was a full day to fill. We took Kyoko sightseeing, shopping and leaf peeping. Sunday evening there was a dinner that host families and the students attended. Japanese students were asked to perform something from their culture. They chose an acapella song. BHS and EHS students were also asked to perform something of their culture. Someone read a welcome letter that they had written in Japanese. A group of girls performed a dance that was popular in Japan and we ended with both Vermont and Japanese students dancing to the Cha-Cha Slide.

Throughout the course of these 10 days, Japanese students travel, as a group, to Middlebury College, the Aiken Center, UVM, the State House, VT Fish and Wildlife, Ben and Jerry’s, Vermont History Museum, and Church Street.

Sasagawa says that she really likes the program and visiting the universities and different places in Vermont. On Halloween, she trick or treated with us and met Bernie Sanders. She said that back in Japan, he used to be on T.V a lot!

Mr. Yu, a teacher here at BHS is also the official GATW at BHS.

If you are interested in joining this program next year to go see Mr. Yu  in C113.