The Week of a Lifetime 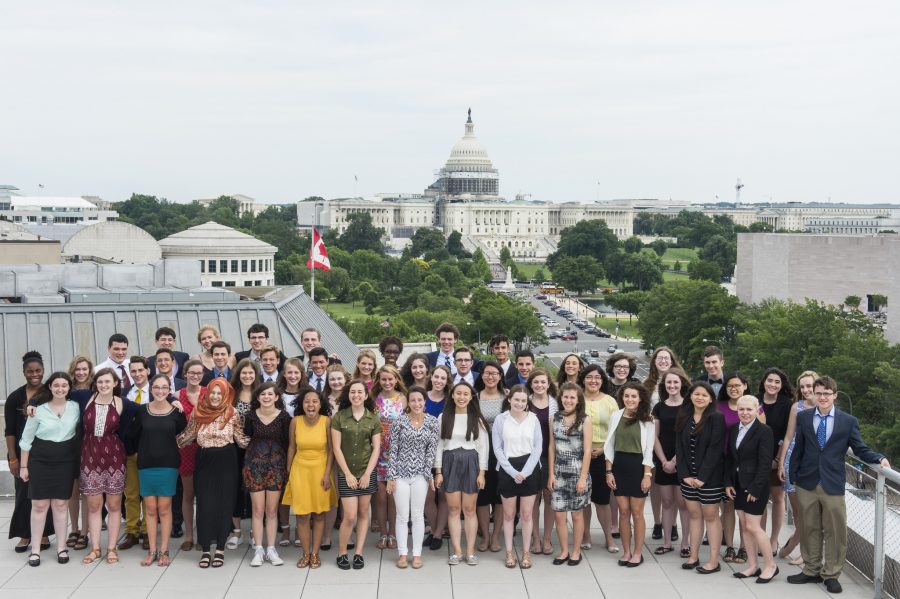 My Experience at the Al Neuharth Free Spirit and Journalism Conference

At a time when the television industry was taking over and the newspaper industry was struggling, Al Neuharth had a vision. He sought out to create a new national newspaper, called USA TODAY, a concept that critics scoffed at. Through his determination and dedication, he revolutionized the industry, creating a new, more colorful newspaper, with more photos and turning Gannett into a billion-dollar company. I look up to him as a role model, as the media industry is ever changing today.

While I will never have the opportunity to meet Mr. Neuharth, I experienced his values and vision this past June, when I had the incredible opportunity to attend a journalism conference, established by no other than the media innovator himself.

The Al Neuharth Free Spirit and Journalism Conference is a five day, all-expenses paid trip to Washington, D.C. with one student from every state and the District of Columbia. In addition, each scholar receives a $1000 college scholarship.

Mr. Neuharth’s goal was to promote the vital role of the First Amendment and inspire the next generation of journalists. For the last 16 years, his conference has done just that.

Each day was packed with seminars and discussions with the best the field of journalism has to offer. We sat in on a live taping of NBC’s Meet the Press with Chuck Todd, met former ESPN sports anchor Chris Berman and former White House Press Secretary Mike McCurry. We had a panel discussion about covering the 2016 election with USA TODAY Washington Bureau chief Susan Page, former Politico editor and current editor-at-large Bill Nichols, Washington Post staff writer Abby Phillip, and CNN Politics editor Juana Summers. Media and technology expert Val Hoeppner came to teach us about the latest and greatest ways to share stories, ranging from Facebook live streaming to Virtual Reality.

One of the most inspiring sessions was when we had the opportunity the meet Sara Ganim, who at only 22 years old, received a Pulitzer Prize and excelled to the top of her field. Ganim broke the story about child abuse accusations against former Penn State football coach Jerry Sandusky for a small-town newspaper and was hired to be a full-time correspondent for CNN. Ganim was an incredible example of how it is possible for us young journalists to reach the top.

After each action-packed day, we would then head off to tour Washington, D.C. at night. I enjoyed seeing the various memorials as it was my first time visiting the capital. We were lucky enough to visit the U.S. Capitol building and see the House of Representatives press briefing room. We even had the opportunity to take part in a mock trial at a U.S. District Court with Judge Royce C. Lamberth.

Each day and each experience just kept getting better and better. One of my favorite experiences was touring the Newseum—the museum of news—which was founded by Mr. Neuharth himself. For someone who is a fanatic about news, the media and the first amendment this was my favorite out of all the museums I’ve been to.

Each moment of the conference was magical, and each session we attended by-far surpassed my expectations. It was one of those experiences where I had to keep stopping myself and reminding myself that this was for real.

I left the conference with an even stronger vision of pursuing a career in journalism. I had the opportunity to be surrounded by many talented journalists and industry leaders and see their excitement and dedication to their profession. I now see journalism as a rapidly changing but still viable career. I also see journalism as a profession that will always be needed. Journalists serve as a watchdog on government, a voice for the voiceless, as well as inform and inspire people to be active members of society. During the conference, the journalists I met reinforced my beliefs that journalism is an exciting, fast-paced environment that would be an ideal fit for me.

The most memorable experience of the program to me will always be the people. I cannot justly describe in words how incredibly motivating and inspiring it is to be surrounded by 50 of the best and brightest young journalists this country has to offer. I had the opportunity to meet people like me, who share the same passion for journalism and curiosity. In a field that is rapidly changing, it was reassuring to see that the future is bright. Meeting these talented and free spirited people has left me excited, motivated and energized to follow my dreams and become a journalist.

I truly hope this program can continue for countless years to come and serve as such a valuable experience for future generations of journalists. I will never forget that if I Dream, Dare and Do—there is no limit to what I can accomplish.