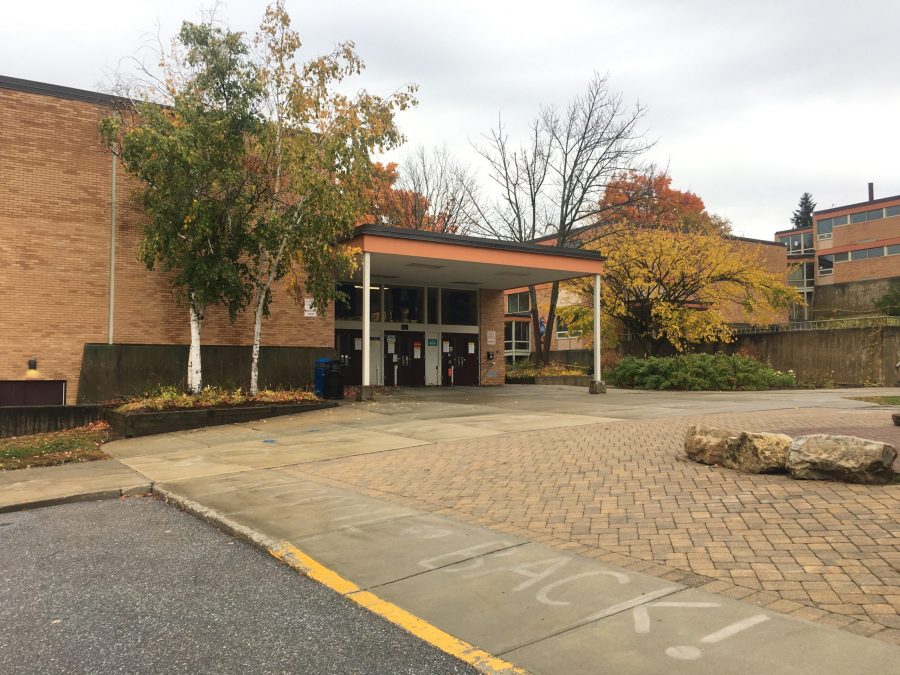 On Tuesday, October 20th, the Burlington School District’s School Board held a meeting to discuss how to proceed after the discovery of Polychlorinated Biphenyls (PCBs) at Burlington High School (BHS). The majority of the meeting was dedicated to the PCBs and focused exclusively on discussion. No vote was held, nor were any immediate decisions reached.

In early September, contractors hired for the BHS ReEnvisioning project discovered elevated PCB levels in the F building of the school that far exceeded the Environmental Protection Agency’s (EPA) limit of 500 nanograms per cubic meter. Test results in other buildings revealed PCB levels below the EPA’s standard but above the Vermont Department of Health’s (VT DOH) threshold of 15ng/m3.

In the meeting, Superintendent Flanagan laid out three potential plans for how BHS could proceed. He assured the board that these options were flexible and that the School District would consider other options if they opened up.

The first plan proposed that students return to the BHS building for in-person instruction through a hybrid model. Remediation of the PCBs and remodeling for the BHS ReEnvisioning project would occur with students in the school.

The third option involves students attending school in an alternative space, while a whole new school is built from the ground up at the original site or in a new location.

Flanagan’s proposed benefits of option one are that it makes for an easy transition and immediate return for students and staff. He also said it would reduce any negative effects the closure may have produced on students’ mental health.

Flanagan then moved on to potential problems with the plan.

Per Flanagan, the renovation has the potential to disrupt learning, and contractors could find even more environmental issues with the building. Flanagan continued that the Secretary of State, EPA, and VT DOH all supported the decision to close BHS. The EPA and VT DOH recommended against returning to the current BHS building with the air quality as it is.

Flanagan also expressed the concern that BHS staff and labor unions do not support returning to the building. Kate Stein, the one BHS teacher that spoke during the slightly over 40-minute public commenting section of the meeting, concurred.

“I empathize with the children,” Stein said. “But I also have a slightly different viewpoint on reopening [than other public commentators] as far as [being] concerned about my health.”

The question of whether to adhere to the VT DOH’s recommendation of 15ng/m3, or the more liberal federal 500 ng/m3 standard put forth by the EPA, came up many times throughout the meeting.

Dan Cunningham, a BHS parent, wanted to know why the VT DOH has not elaborated on the basis of their PCB thresholds and why they differ from the standards of other countries, states, and the EPA.

“If they cannot defend the basis of their thesis, it calls the entire argument that they’re making into question,” Cunningham said.

14 of the 16 public commentators generally agreed with Cunningham and actively urged the School Board to reopen the BHS building for in-person learning. Nearly all of these 14 commentators criticized the VT DOH’s PCB standards in some way.

“There’s a lot of reason to not be confident in the number the Department of Health has churned out, given that in Denmark, you wouldn’t close a school until levels were at 3000 ng/m3,” public commentator, Caroline Beer said.

Beer questioned whether the VT DOH would reach a different PCB recommendation if they accounted for the use of masks.

“We are so far out of keeping with the rest of the world on [PCB regulations] that it’s a problem, and it needs to be addressed on a legislative level,” Gorman said.

Gorman then called the correlation between PCBs and cancer “flimsy as hell” and urged the district to reach out to legislators about correcting the VT DOH’s regulation.

“I’m really uncomfortable with our School Board looking to make the decision that the Department of Health guidance is wrong… I’m really concerned when I hear verbiage like ‘flawed science’ or ‘can we adjust the calculations,’” Fisher said.

Fisher recognized many factors that should be considered in the VT DOH’s recommendation.

“As an elected government official, I need to work with the DOH and EPA, not against them,” Fisher said. …”The biggest thing that they’re missing is that it’s not just the risk of health impacts from PCBs, it’s the actual impact that remote learning has on our students.”

Option two keeps with the VT DOH’s recommendation of closing BHS until PCB remediation can be conducted. However, it opens up other issues.

Flannagan explained that this option would come with a large transition period and set up time would be needed. It would require a learning curve for staff and students.

“[It] could possibly also impact our overall budget. It could include funds currently allocated for the ReEnvisioning project,” Flanagan said.

The alternative location would also not be set up in a traditional school design, meaning that it would lack things like a gym or cafeteria. Flanagan said that this would not pose a major problem, as the BHS gym, auditorium, and cafeteria all tested below the VT DOH requirement of 15 ng/m3. He said that students and teachers may be able to use those spaces in the future without remediation.

Commissioner Kendra Sowers (District North) communicated concerns about the airflow in a building with no windows and makeshift walls that do not reach the ceiling.

“That is something that we looked at really carefully and feel comfortable that the airflow in the space would create a safe environment,” Flanagan responded.

Option three has similar issues to option two. However, budgetary problems are much more extensive.

Though the specific costs have not been made public, Flanagan said that building a whole new school on a separate site or at the present location will require an additional bond to be approved by voters.

He then told board members that though the state provides some relief, it is not enough.

“We are in the millions in the conversation about an alternative space,” Flanagan said. “The type of funding that’s available for aid in these types of situations is below $100,000, but I think there’s room for advocacy.”

Aside from cost issues, option three will also take significantly longer to complete than the other proposals.

Director Spaulding reported that it would take developers at least 18 months to draw up new design plans.

Flanagan also added that no site was identified as a suitable building location for a new school in the planning of the BHS ReEnvisioning project.

Before making a decision, the board is waiting to hear from BHS staff and learn of the specific costs. To receive this staff input, Flanagan announced that a survey will be sent out to all staff and students later in the week asking their opinions on alternative spaces. Cost estimates for the three options will be given to school board members later this week or early next week.

Rebecca Cunningham, a student representative on the school board, communicated the uncertainty students are feeling during this time.

“One of the greatest stressors for students is the lack of a concrete timeline,” Cunningham said.

Flanagan reaffirmed that his goal for the semester is to get students back to in-person learning by the second semester. However, he said he cannot promise this.

“There are some major decisions that need to be made before we can commit to that timeline,” Flanagan said.

The next school board meeting is Tuesday, November 10th.