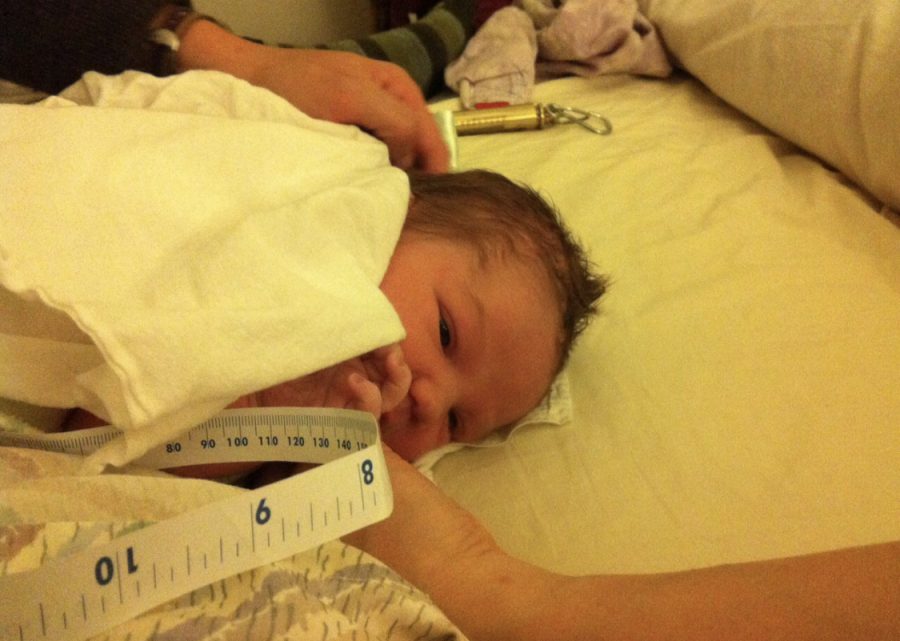 My baby sister sara getting weighed and measured after being born at home. Photo: Courtesy David Conner

We live in an age full of choices; Do I want a purple iPhone 11 or a gold one? Is it worth it to splurge on the newest trendy shoes? Should I watch season 14 of Grey’s anatomy or finish my pre-calc homework?

A choice that many women will have to make over the next 30 years is the choice of what kind of women’s health care they want for themselves and how they want to bring their children into the world. The most common way that babies are born in the US is in a hospital with an OBGYN, however, there is another option for expecting mothers. Giving birth at home with a midwife is a  growing option for women who would prefer a more natural and familiar atmosphere.

Some do not have access to the same health care, although all the federal health care companies like medicare do cover childbirth. If one does not have any insurance What to Expect reports that home birth and birthing centers are often half the price of delivering at the hospital.

OBGYN’s are medical doctors that went to medical school and trained in women’s reproductive health, gynecology, and childbirth, obstetrics. OBGYNs can perform cesarean sections, surgical birthing the baby, in the case of emergencies. Most often OBGYNs deliver in hospitals where main medication such as an epidural, a medicine that numbs below the belly button, can be used.

Midwives are professionals that were trained in delivering babies and in women’s health. There a few different ways that someone can go about in order to practice midwifery. The first is to become a Nurse-Midwife by becoming a Registered Nurse (RN) and then getting a master’s of science in midwifery. Nurse-midwives can provide prescriptions as well as give birth control. They can provide health care throughout a woman’s life as well as deliver babies in a hospital setting. Another way to by entering a direct-entry midwifery program and sit for a national licensure exam to become a Licensed Midwife. Licensed midwives are only licensed in some states and can only work with pregnant or recently pregnant women and attend their births.

April Vanderveer is a certified Nurse Midwife (CNM) who started in midwifery 20 years ago as an apprentice to her now coworker Peggy Cohen at Full Spectrum Midwifery in Burlington. She worked as a midwife both in and out of a traditional hospital. She said that pregnancy is a natural and sacred experience.

“We really try and show that pregnancy is a normal thing and the person isn’t sick,” Vanderveer said.

Those that have expired natural birth and have been exposed to the whole world of home birthing feel that there are a lot of misconceptions and stereotypes that come along with natural home birth.

“People think it’s like hippies who want no medicine, but a lot of it is actually like highly educated people who have done a lot of research and see that it’s a viable option,” Vanderveer said.

At Burlington high school, 5.7% of the 228 respondents said they were born at home. This is markedly higher than state and national averages.  Statistica reported in 2018 that Vermont has the second-highest rate of home births in the country at 2.6%. The national average of homebirth in the United States is 0.9%.  37.4% said their births were natural.

Julie Miller met her midwife at yoga practice and gave birth to her only daughter at home 16 years ago.

“I wanted comfort and as natural as possible, a hospital didn’t seem to offer any benefits in my situation. I used a midwife and they were enthusiastic about home births so I had all the support I needed to be able to birth at home, I didn’t regret it! It was lovely to be at home for the process,” Miller said.

Some factors that draw women into the experience of home birth include, Having more control of their environment, having as much time as they need, having a much more natural and sacred birthing experience

Iana Fraser has had four natural births, one at a hospital, one at a freestanding birth center and two at home. All her births were with midwives. Full disclosure Iana Fraser gave birth to me at home in 2003.

“The births that I had with midwives at home the babies stayed with me and at the hospital they kept taking the baby away, home was a much more intimate environment,” Fraser said.

My baby sister and I just minutes after she was born. Photo: courtesy David Conner

Fraser, like Miller, agrees that the choice of a homebirth just felt right.

“I felt more comfortable at home, hospitals make me feel nervous and anxious, it was the last place I wanted to be when having such an intimate experience between me and my baby,” Fraser said.

At a home birth, a lot of the times a midwife stays out of the way.

“Our job a lot of times is just watching out for anything that needs attention and being really good at sitting on our hands, letting things happen because women were made to have babies but we are always on the lookout for something that needs help,” Vanderveer said.

A midwife, like an OBGYN, follows a mother through the entirety of her pregnancy to the post-birth care, called postpartum care. Sometimes postpartum care also involves looping more people in. Making sure that the mom is seeing a counselor for postpartum depression or getting extra help to take care of her other kids.

“We support women’s rights to have babies however they want,” Vanderveer said.