Looking into Lakeview: learning from a cemetery rich with local history 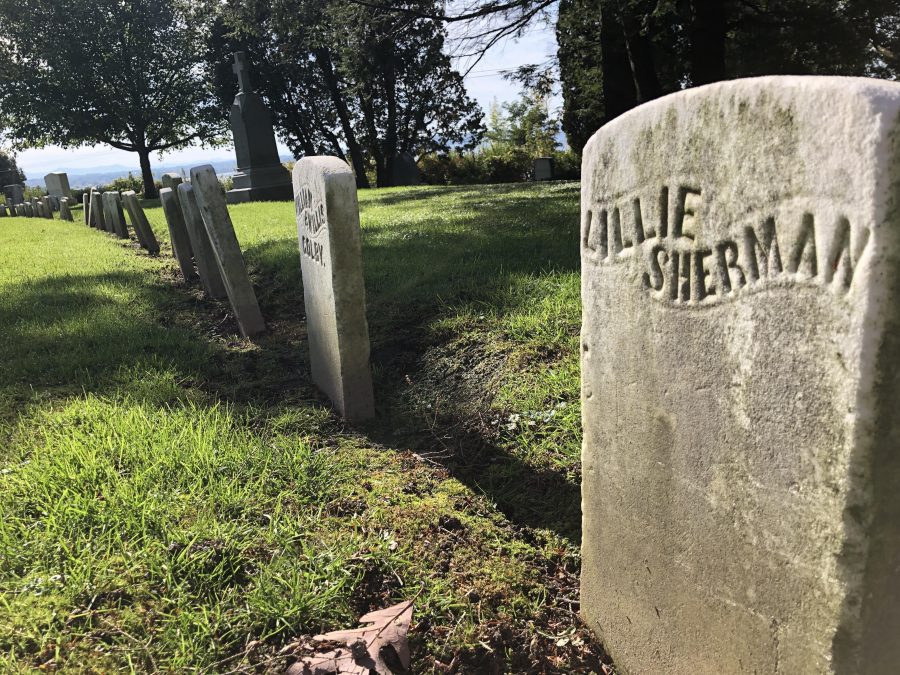 Spooky season is upon us, and Halloween brings a certain urge to face the frightening. From deserted tombstones to lurking ghosts, cemeteries are commonly known for their haunted environments. Such is not the story of North Ave’s Lakeview Cemetery. Built on a beautiful lakefront hillside, Lakeview Cemetery was designed to be a family gathering place, welcoming visitors for picnics after Sunday morning church.

In the late 19th century, the growing city of Burlington was running out of space in its local cemeteries. There was a catholic cemetery, plus the primarily Protestant city-run cemeteries: Elmwood Cemetery in the Old North End and Greenmount Cemetery by Centennial Field. As burial space became scarce, the city bought the large lake-front lot off North Ave from H.B. Sawyer and began to develop Lakeview Cemetery. As soon as lots were developed, some occupants were moved from Burlington’s other public cemeteries. Lakeview officially opened in 1871.

Office Assistant Holli Bushnell’s childhood home is surrounded by the town cemetery in Rochester, VT. Coincidentally, she’s never lived more than a mile away from one.

“[Cemeteries] have never felt weird or taboo to me,” Bushnell said. “I love these spaces. I think they are beautiful and they hold our history.”

Bushnell was kind enough to give me a walking tour of Lakeview, located directly adjacent to Burlington High School (BHS). As someone who considers the title of “Star Wars” to be a jump scare, I expected to find eerie inscriptions and mausoleums brimming with phantoms. Instead, I learned the history of Burlington, straight from the grave.

The Friends of Lakeview Cemetery donated funds to restore the Louisa Howard Chapel in the 1990s.

The Friends of Lakeview Cemetery also restored a gazebo and a fountain in the cemetery.

The Gothic style chapel opened in 1882, with funds donated by local philanthropist Louisa Howard. Until its creation, Lakeview Cemetery did not have a gathering place for people to memorialize their loved ones. Due to funding shortages during World War II, the chapel spent the 1940s to the 1990s as a storage space for coffins. Bushnell said that, based on her research, funds during that time were allocated toward the upkeep of the cemetery grounds. It was not until the formation of the Friends of Louisa Howard Chapel, now known as the Friends of Lakeview Cemetery, that the chapel was completely restored in the 1990s and 2000s. The group is also credited with the restoration of the cemetery’s gazebo and one of its fountains. As for the chapel, the original slate roof still shelters mourners, and the original bell still tolls in the bell tower.

Starting at the gate and walking down the path, past the Louisa Howard Chapel, there lies an area to the right that was originally developed for Civil War soldiers. Burlington has a long and dedicated history of involvement in the Civil War, being the place that many soldiers called ‘home’. Some who died were immediately brought back to Burlington for burial, while others were originally buried down south. Their bodies were later moved up and memorialized at Lakeview.

Lakeview is typically open for tours on Memorial Day, and the cemetery staff ensure each gravestone is properly marked with an American flag.

Lakeview is home to a traditional potter’s field, a site for the burial of people who could not afford a proper gravestone and service. Indigent burials are no longer in practice. Instead, the closest modern day comparison is cremation. Lakeview has developed a specific area for urns, which still present a cost to the family. According to office assistant Holli Bushnell, the number of families choosing traditional burial or cremation used to be a fifty-fifty split. Now that ratio is closer to eighty-twenty, in favor of cremation, due to its lower cost.

William Wells earned the Medal of Honor for the Battle of Gettysburg.

George Stannard fought alongside Wells in the Battle of Gettysburg.

The resting site of Civil War General William Wells is marked with a massive boulder and a plaque that lists Wells’s extensive history in the Union Army. According to the plaque, Wells was “twice wounded and once a prisoner.” He was awarded the Medal of Honor after commanding the lead battalion at the Battle of Gettysburg and miraculously managed to come out unharmed. There is a statue of the Waterbury native in Burlington’s Battery Park, and a duplicate statue stands in Gettysburg National Military Park.

Warren Austin was a Vermont state senator, known for serving as the first U.S. ambassador to the U.N. Austin studied law at the University of Vermont in the late 19th century, and became the State’s attorney of Franklin County, VT. He quickly rose to become a U.S. senator and served in that capacity until his resignation in 1946, when he became a representative on the Security Council of the UN.

The Protestant alternative to St. Joseph’s Orphanage, the Home for Destitute Children was originally founded to aid orphaned daughters of Civil War veterans. It later became home to all orphans and abused children. In the late 19th and early 20th centuries, disease was rampant. It took the lives of many children in the Home, and Louisa Howard generously donated the money to purchase gravestones for the children who died.

Lakeview Cemetery houses areas specifically for Jewish and Muslim burial. The Jewish section was purchased by Temple Sinai and is used solely for Jewish burial. While the Muslim section was not purchased by an islamic organization, Lakeview works with the Islamic Society of Vermont in order to ensure that cemetery staff are respectful of Muslim traditions.

“We are trying to honor the practice of that faith and still have it be a public cemetery, which is a little bit of a complicated line to walk,” Bushnell said.

From growing up in close proximity to it, to making a career of it, Bushnell feels fairly comfortable around death. She has a good grasp on the grieving process, which stems both from experiencing loss in her own life and observing the mourners she works with. To her, this is a gift.

“I think that the way, specifically Western society and Americans relate to death is not healthy. We have distanced ourselves so much from it that it’s something we are terrified of,” Bushnell said.

Lakeview was built as a Victorian cemetery. Victorians had a very different way of handling death, due to its ubiquity in daily life. Instead of passing in hospitals, people passed at home, and high mortality rates in Victorian England made death a focal point for families. Bushnell believes it is essential to keep this in mind in order to honor the origins of a cemetery that is still in use today.