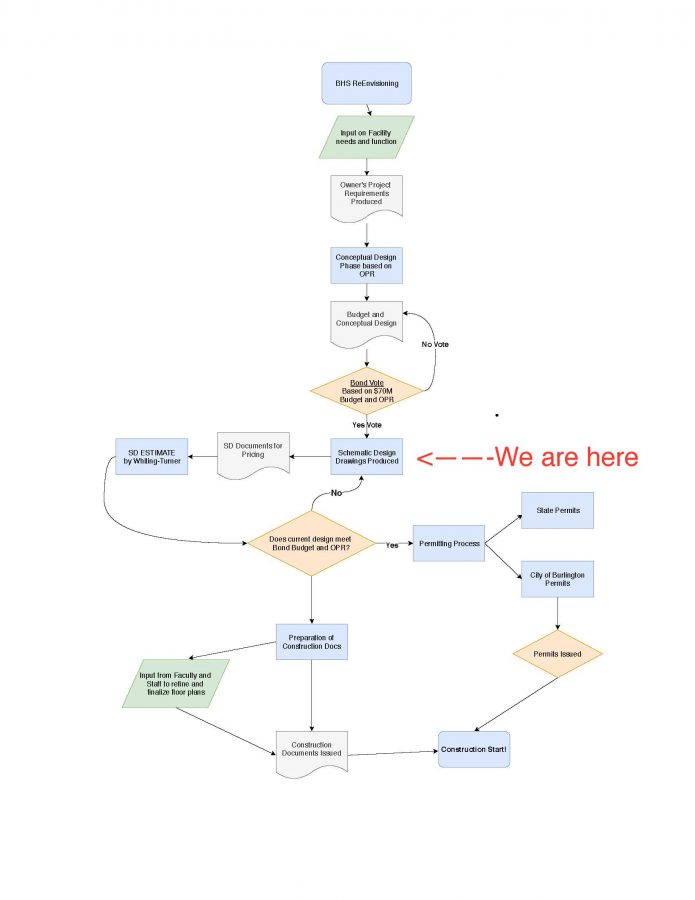 As of late August, the BHS/BTC Building Construction and Oversight Committee (BCOC) reports the initial design would cost $91 million, $21 million more than the bond provides.

The BCOC said drivers of this high cost include price per square foot and unforeseen mitigation of hazardous materials such as the need to remove contaminated soil unfit for building, and to remove or mitigate asbestos in the current structures. Essentially, any building south of A building, where the new building was planned, escalates costs due to structurally deficient soil.

Consequently, the BCOC is looping through a process of redesigning and reestimating, a process common in construction projects of this scale.

Tom Peterson of Peterson Consulting, the owner’s project manager, said the committee is determined to rework the project to bring it to or under its $70 million limit. To limit the compromises, they may explore other fundraising options such as capital campaigns and individual donors.

“I know for a fact that the goal right now is to not draw from taxpayer dollars any further,” Jean Waltz, Central District Burlington School Board Commissioner, said.

Committee member Eric Hoekstra of Redstone Development suggested that the project be postponed for two to three years, at which time he said pricing will be lower.

“Construction costs are higher than they’ve ever been in history right now. It’s the worst moment in history to build,” Hoekstra said.

Contrary to Hoekstra’s assessment, BCOC member and Ward 8 Burlington School Board Commissioner Keith Pillsbury does not think waiting is the answer. He said he has consulted other architects who say construction costs do not go down.

“The longer it takes to get started, the more expensive it’s going to be,” Pillsbury said. Whiting-Turner, Neagley & Chase told Pillsbury a year long delay would increase construction costs by about $1.8 million.

Regardless, the original timeline that put shovels in the ground in the Spring of 2020 seems unlikely.  Hoekstra urged fellow committee members to slow down the process while maintaining transparency with the constituents who passed the vote.

“I think we would all be better off admitting to the public now that this is not a 2020 project. This is a 2021 project,” Hoekstra said.

According to Peterson, it would be dangerous to crunch the groundwork that needs to be laid out before the construction starts.

“You just have to take it step by step by step. I think one of the difficulties is that we still have a schedule that says we want to be in the ground by June or July next year,” Peterson said.

Waltz said that the design shared with the public prior to the bond vote represented the ideal situation – a wish list school. Waltz said she felt that dream design was a doable projection of the public’s wishes.

“I felt like you kind of have to have something for people to see…at the same time, I knew that it was going to go through different phases,” Waltz said. “There’s always going to be this shoot for the stars but then get to the practical, happy medium.”

Prior to September 17,  Black River Design, the architects, had presented eight alternatives to the BCOC officers, all of which remained significantly over budget despite compromising some keystone promises to the public.

Peterson shared a likely redesign with the committee that eliminates the south ledge and terrace area.

Most options keep the Burlington Technical Center aviation program in place, which means the property services building will remain on Shelburne Road.

“We haven’t made any decisions. We’re looking at all the choices,” BCOC member and Burlington School Board member Keith Pillsbury said. “[Black River Design] came up with a ninth [choice] which really came down to pretty much within the budget.”

This latest design was presented to the BCOC on Wednesday, September 25. The BCOC directed the architects to refine it, which will include more consultation with staff, before presenting a final design to the Burlington Finance Committee and the Burlington School Board.

“Some people will be disappointed [that] it’s not a 21st century big showcase, but it will be a modest construction that will provide fresh new facilities for students to learn in,” Pillsbury said.