“Our house is on fire”: Burlington strikes for climate change 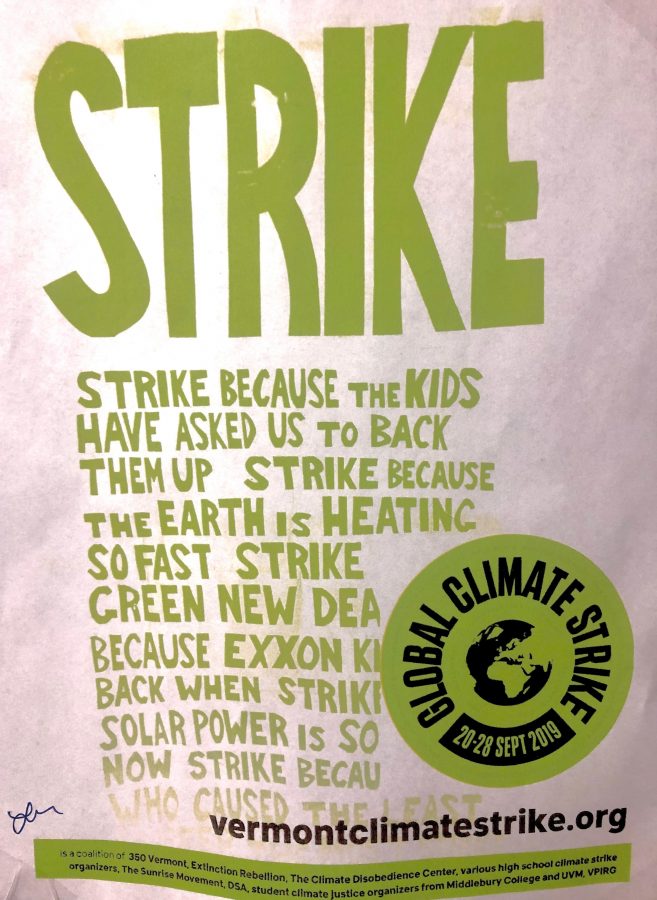 In August 2018, Swedish teenager Greta Thunberg started an international political movement.  Every Friday, instead of school, Thunberg occupied the steps of the Swedish legislature to insist they find a solution to the climate change crisis. Thunberg’s persistence launched a social media wave, and students across the globe have followed her lead.

By March of 2019, a movement was born. Here in the U.S. proposals for a Green New Deal, Global Climate Strikes [see here for BHS climate strike], and a presidential debate dedicated specifically to the environment all share the feeling of urgency Thunberg promotes with her now famous call to action: “Our house is on fire”.

Tomorrow, Friday, September 20th, youth around the world are calling for a global walk out. Burlington youth are echoing that call. Multiple marches will converge on City Hall Park at noon. Although the climate strike is not a school sponsored event, marches will start from University of Vermont, Hunt Middle School (HMS), Edmunds Middle School (EMS), and Burlington High School (BHS). The Sustainability Academy, one of Burlington’s elementary schools, has organized a field trip to the march for their entire fifth grade class.

Burton Snowboards, whose international headquarters is in Burlington, closed all of their stores in support of the climate strike and local employees will march from their Queen City Park Road HQ to City Hall.

At the September 10th, 2019 Burlington School Board meeting, parents and teachers appealed to the district to promote climate change curriculum and support the strike.

“Last fall, scientists told us we have 12 years to complete massive changes to our energy infrastructure in order to avoid the worst impacts of the climate crisis. That was last fall, so we now have 11 years,” Messinger said.

Messinger said the burden of the climate crisis will be put on young people in the future, so adults should give students their full support.

“Climate change will affect students more than it affects any of us here tonight,” Messinger said. “It’s up to us to be the adults in the community to model to students how to work for a better future.”

Shanta Eastman, another BHS parent, read a letter signed by Burlington parents and staff aloud to the board.

“We suggest that you dedicate September 20th, the date of the upcoming worldwide Climate Strike, to climate education,” Eastman said. “Perhaps the entire week could be dedicated to it, or better yet, integrate the study of climate change throughout the year’s curriculum. We would also urge you to highlight climate justice leadership from frontline and Indigenous communities.”

The school district has not mandated faculty to teach about climate change; however, it has supported the strike by encouraging parents to excuse student absences.

Throughout this week, district principals emailed parents about the strike.  BHS Principal Noel Green sent out the following email to BHS parents:

“Burlington High School will excuse absences for students who plan to attend [the strike] as long as it is with parent permission,” Green wrote. “This communication should come in the form of a phone call to our attendance office or the submission of a signed note excusing your child’s absence, as you would with a typical absence. Students who are absent must make up any missed work with their teachers.”

Students were not sent this email.

At HMS permission slips were sent out to parents. As of today, about 48 students had confirmed that they will be participating.

Nathan Caswell, a science teacher at HMS, said it is especially important for middle school aged students to participate in the strike.

“Participating in the Climate Strike helps students grow a sense of agency, and provides a supported positive experience with civic engagement and social activism. Research has shown that engaging in social action can be effective in boosting mental wellbeing and resilience,” Caswell said.

The Burlington Education Association (BEA), the union of Burlington teachers and paraeducators, also voiced their support of both the walk out and the teaching of climate change curriculum.

“The Burlington Education Association stands in solidarity with the Sunrise Movement in asking lawmakers to take action immediately to stop climate change and save our planet for future generations,” Betsy Nolan, BEA Communications Chair and music teacher at EES, said.

The Sunrise Movement is a youth-led climate change movement.

“I felt that supporting this work was essential to not only the goals of the Climate Strike, but also to the larger goal of teaching students to care about their society and take action when they see injustice,” Nolan said.

When polled, 80% of BEA members who responded supported solidarity with the climate strike movement and integrating climate crisis topics into a district wide day of teach-ins on September 20th.

Burlington Technical Center (BTC) teacher Bram Moreinis, is adamant on finding ways to teach about the climate on Friday.

“All teachers can find connections in our curricula if we look for them,” Moreinis said. “I do plan to teach about the climate on Friday, and I know many others who are.”

“Adults haven’t fixed this problem and kids are going to be saddled with the effects. I think that if they’re getting more information about their future, why they should be concerned and what they can do about it, [missing class for the strike] is okay,” Hoffman said.

Chloe DeBedout, a BHS senior and the co-president of the BHS club LEAP (Leaders for Environmental Advocacy and Protection) , said the power of the strike is in numbers. LEAP sent an email to all BHS students and staff encouraging students and staff to march or take the bus together.

“I think that a climate strike can get information to people about what they can do to help,” DeBedout said. “When people see everybody coming together, I hope that it can spark that community sense that you want to take care of it.”

“As I’ve gotten older I’ve started to learn about and realize how much of a problem climate change is, and I think we really need to start making a difference,” Kahl said.

Eamon Dunn, a BHS senior, says it is important for the youth voice to be heard.

“I want to support the strike because every day that politicians let go by without passing sustainable policies the crisis gets worse,” Dunn said. “They need to know that we take it seriously and that we care.”

Maria Worden, a freshman, admires the origin of the Global Climate Strike and wants BHS students to follow suit.

“Hearing about what Greta Thunberg did, starting this from just skipping school on Fridays and raising more awareness, it really inspires me. I definitely want to get my school to do that.”