During the 2019 Oscars on February 24th, viewers were shocked by the winner for the Documentary Short Subject category. It is called Period. End of Sentence, a documentary telling the story of the lack of menstruation supplies for women in India. Earlier that month, it was announced by the Unicode Consortium, the organization that coordinates the creation of emojis, that there is going to be a red drop emoji to represent menstruation which will be released this spring.

As this film and emojis can attest, taboos about menstruation and the stigmatization of women for the natural biological process abound in all cultures.

According to the United States Office on Women’s Health, the menstruation cycle is, “the hormonal process a woman’s body goes through each month to prepare for a possible pregnancy.” It is necessary to reproduce and yet, there is a taboo surrounding it.

Menstruation stigma is the shame a society associates with women because they menstruate.

“I don’t know how period stigma originated but I think [menstruation] was kept on the low low for the longest time,” Kelemua Summa, a freshman at Burlington High School (BHS), said.

Little knowledge of reproduction and menstruation lead to misconceptions. Pliny the Elder (AD 23-79), an author, natural philosopher, and general from the early Roman Empire, wrote:

“Contact with [menstrual blood] turns new wine sour, crops touched by it become barren, grafts die, seed in gardens are dried up, the fruit of trees fall off, the edge of steel and the gleam of ivory are dulled, hives of bees die, even bronze and iron are at once seized by rust, and a horrible smell fills the air; to taste it drives dogs mad and infects their bites with an incurable poison.”

If this is the language and attitude of the powerful and respected men of the age, one can imagine the impact on women in Rome. There are no records on the subject of the treatment of menstruation in Rome. This silence is telling.

Today, women are allowed to hold positions of power, have an education, and make their own decisions, but misconceptions still reflect ancient attitudes. Some students believe that menstruation makes you weak, unclean spiritually, or make women irrational and emotional.

“In movies and stuff, and in real life, if some lady is angry, they’re like, ‘Oh, she’s on her period,’ like it’s the only way she can have emotions,” sophomore Quincy Massey-Bierman said. “People are like you can’t be angry unless you’re on your period. It’s like a double standard. Men can be angry all the time and it’s like, ‘Oh, they’re being men,’ but when women are angry it’s like ‘they can’t be naturally angry so it must be their hormones.’”

Our popular culture perpetuates this gender stereotype. For example, many young women have seen Mean Girls. In one scene of the movie, the principal asks the female students if any of them were on their period, thinking that was the explanation to why the school became chaotic.

In a commercial for Playtex tampons from last year, the narrator, Chloe Lukasiak describes the tampon as, “awesome because it’s discreet. It’s the most compact compact, and it protects like a full size tampon.” So women are still told their periods are something to hide.

The 2011 publication, The Menstrual Mark: Menstruation as Social Stigma, by Ingrid Johnston-Robledo and Joan Chrisler examines the transmission of menstruation stigma mothers give to their daughters. Girls typically inherit an etiquette around menstruation, especially around concealment. Johnston-Robledo and Chrisler continue to write that menstrual blood is perceived to be more disgusting compared to other bodily fluids. 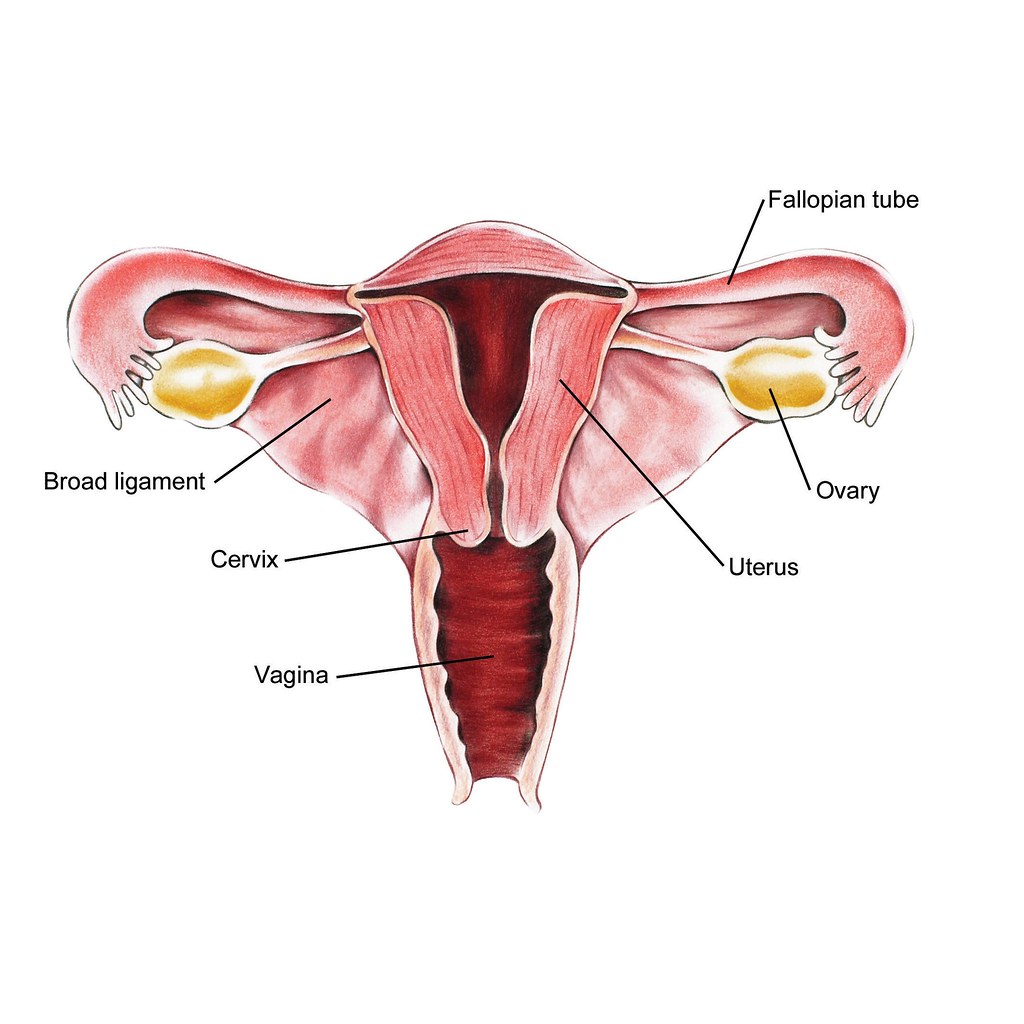 Image: FlickrDiagram of a uterus

“It’s not the most sanitary thing and so people kept talking about it like, ‘it’s so gross, it’s so disgusting,’” Rose MacQueen, a sophomore, said.

It is true that for centuries, women bled freely into their underskirts and that led to infection. However, menstrual blood by itself is one of the cleanest fluids in the human body. So why is it still perceived as disgusting?

“I think that that’s a little crazy since it’s a natural body function,” junior Sven Stenroos, said. “It’s kind of ridiculous to act and say that it doesn’t happen because it does happen for all the women on the planet. I thinks it’s crazy to try to hide it. It’s just what happens.”

“I’ve had girls who’ve needed to borrow a sweatshirt or a smock to cover up because they’ve bled through and they’re super embarrassed about it,” Kate Healy, a fine arts teacher at BHS, said. “That’s always hard because I think most of us have been in a position of our lives where we’re hoping that the inevitable didn’t happen but being so embarrassed about it is sad to me, an ashamed feeling.”

The “inevitable” is the experience of bleeding through undergarments and clothing. It is common for women on their periods, so women use products like tampons and pads to prevent that from happening.

“It’s always fun when you don’t have any supplies,” Massey-Bierman said.

Female students and staff worry that they will be caught off guard by their period without their menstruation products. During school days, female teachers hope that their menstruation does not come during class time. Teachers store feminine products in their classrooms and students have supplies in their backpacks. Many feel that tampons and pads have to be concealed because people will somehow be offended by them.

BHS girls feel the pressure of this stigma. They feel awkward and ashamed when asking for necessary things during their menstruation like time out of class and supplies.

“I think the most shared experience is trying to be discreet about the fact that they’re on their period,” Summa said. “Hiding tampons or pads. Try to discreetly be like ‘hey I have to go to the bathroom.’”

One consequence of this discretion and the mystery surrounding periods, is that young women learn they can use their periods as an excuse. Kia’Rae Hanron, a student intern, worries that using menstruation as an excuse not to participate sustains the stereotype of weakness.

“I think there’s this want to not make it seem that your period makes you weaker,” Kia’Rae Hanron, “By using it as an excuse, you’re potentially giving someone ammunition to be like ‘oh see, women are weaker because for a whole week out of every month they can’t do anything’ so I think that’s something that I’ve become more aware of in terms of using it as an excuse.”

A gender gap of understanding

“I think the best thing that we can do around it is just education,” Summa said.

Segregated sexual education from early on in a child’s life plays a large part in menstruation stigma today. From elementary school, both girls and boys are grouped off when they are learning about their own bodies.

“Most men like me don’t know a lot about [menstruation],” Stenroos said. “Anything I know is secondhand or third-hand from other people. I think most of us don’t know what the hell is going on with that kind of stuff.”

Without proper education and understanding between both genders, confusion and misperceptions arise, dividing genders even further.

Although education is important to cease menstruation stigma, MacQueen says that just talking to each other about the subject will encourage society to embrace menstruation as normal. Interestingly, when the Register attempted to reach out to students for interviews, many were unsettled and declined.

“It’s kind of interesting because people talk about sex all the time and no one cares, it’s like a normal thing and we make innuendos all the time referring to sex,” Massey-Bierman said.

Although menstruation is still referred to as a taboo subject, Healy and Massey-Bierman agree that it has helped them bond with other female students and women.

“It’s like a sisterhood,” Hanron said. “[Menstruation] brings you into a sisterhood as cheesy as that sounds. There’s a sort of camaraderie.”