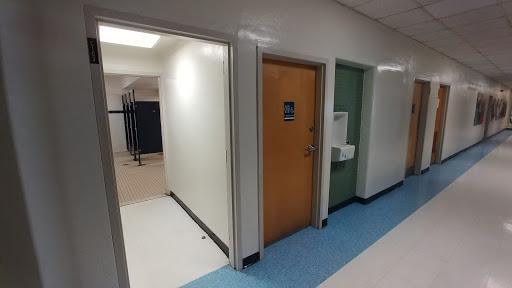 On Thursday, January 17th, Burlington High School (BHS) students looking to use the boy’s bathroom in C building found the door had been removed.

Students and faculty said that the door was likely removed to combat the use of vapes and electronic cigarettes, an epidemic that is affecting nearly every high school in the nation. It is widely known that the  C building bathroom is a popular place for students to vape.

“I think it’s unfortunate but necessary at this time,” Brian Williams, BHS English teacher said. “If we have activity in that bathroom that we can’t monitor, such as vaping or drug dealing, then the doors need to come off. Which I think is unfortunate because a small minority of students are ruining [bathroom privacy] for a lot of students.”

The open door has not stopped students from using the stalls to relieve themselves.

From outside the bathroom, it is possible to see feet in the bottom of the stalls, and at the right angle, one can see the backs of those using the urinals.

“I think it is kind of creepy that you can just look in from the outside and see guys in the bathroom,” Loy Prussac, BHS junior, said.

Photo: Ayden Flanigan The backs of students using urinals in the bathroom can be seen from the hallway.

Although removing doors may aid BHS faculty in reducing the use of bathrooms for vaping, many believe this action is just going to relocate the problem. Zani Lewis, a sophomore at BHS, believes that the recent bathroom control is an act of desperation.

“They have vape detectors in F building bathroom. They took the door off C building. The school is doing all they can to prevent the problem. There’s not much more that can really be done. People have always found a way. Ever since vaping was a thing, you’ve been able to do it in class,”  Lewis said.

In an email to the Register BHS Vice Principal, Herb Perez, said, “In an effort to maintain the safety of all students that use the C Building Boys’ Bathroom, the decision was made to remove the door.  This action will cut down on such off-task behavior as bullying, harassment, vaping, and graffiti. It will ensure that students and staff who wish to use this facility will be able to do so without concern in a safe, reasonable, respectful, and dignified manner.”

This article was updated on January 22nd, 2019, to include an official statement by BHS Administration.