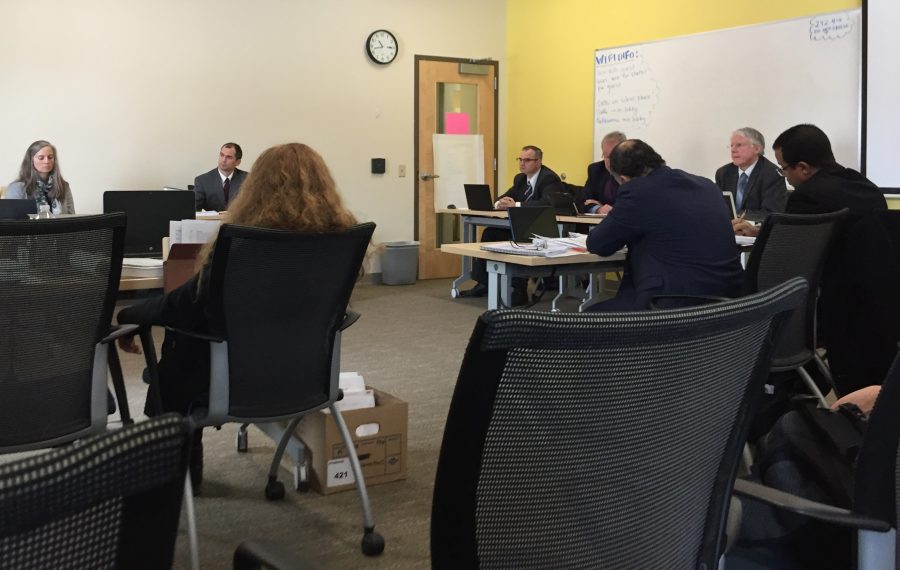 On November 15, the Vermont Agency of Education (AOE) held the hearing to present their case against Burlington High School (BHS) Director of Guidance, Mario Macias. Macias was placed on paid administrative leave on September 14 after the AOE charged him with 6 (now 7) counts of unprofessional conduct.

The hearing process will take multiple days.  Day one began with the denial of a motion from Macias to dismiss the charges against him, followed by a reading of the counts of misconduct by Adam Powers, an AOE hearing officer.

“We will be considering a much broader [scope] of evidence than you might see admitted in a civil proceeding,” Powers said after reading off the counts.

The AOE needs to provide “clear and convincing evidence” for the panel to follow the AOE recommendation that Macias’ license be revoked.

“We believe that when you’ve heard the evidence, and the witnesses you will agree that Mr. Macias’ conduct was wrong,” Emily Simmons, AOE attorney, said in her opening statement. “That it violated the standards of professional conduct for professional educators, and that taken together, the evidence demonstrates he was incapable of performing the duties and competencies required by the license.”

Francisco Guzman, the attorney representing Macias, implored the panel to “evaluate” and “challenge” the witnesses. He asked them to consider if the witnesses looked nervous or unsure of themselves.

“I respectfully demand you exercise your right to question [the witnesses] once they finish with their testimonies,” Guzman said. “You already know that they wanted to sexualize these charges against Director Macias.”

Simmons called AOE investigator Robert Stafford to testify as the first witness. Stafford said typically, an AOE investigation follows a district investigation.  Yet they opened this investigation on October 5, 2017 due to the media coverage of the Burlington school board meeting where the BHS guidance counselors shared their troubling experiences working with Macias.

According to VTDigger, witnesses included Jeanne Collins, superintendent of Rutland Northeast Supervisory Union and former Burlington superintendent, Lynn Kennedy, former director of Horizons, a BSD Alternative Program, and Colleen McSweeney, the former BHS registrar.  WCAX reports that Mollie Bachner, a former student teacher at BHS, and Roger Forando, who was hired by the district to assess the BHS guidance department, testified in the afternoon.

According to NBC5, Forando said Macias, “was under qualified based on the requirements of the job”.

The hearing is expected to take several days.