No or yes for BHS: students weigh in 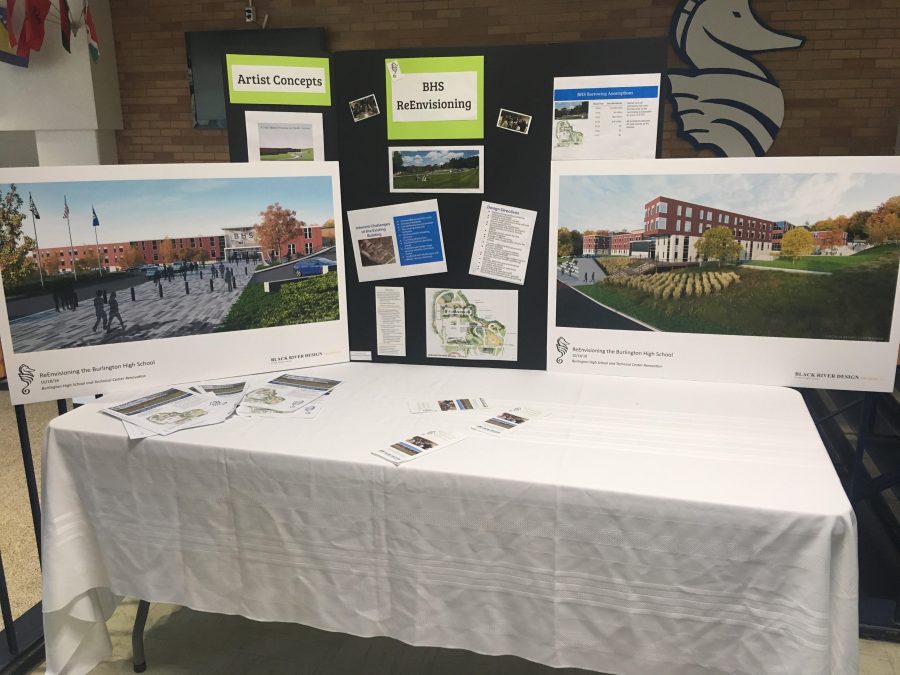 Photo: Julia Shannon-Grillo Information table about the remodel displayed in the BHS lobby

On October 2nd, a trickle of water dripped into the ramp that connects B building to C building. First, a wet floor sign was enough, but as the water accumulated, the ramp was shut down.

The closed ramp proved to be an inconvenience to many students trying to navigate the building. Many  students, like freshman Rehema Abdi, were late to class due to the closure.

“I didn’t know that [the ramp] was closed, and so I was trying to go to class and I was panicking because I didn’t know where to go in the first place.” Abdi said.

The ramp incident reflects a piece of the broader issue of Burlington High School’s (BHS) deteriorating and unsafe structure.

The physical layout of the school is especially challenging for students with physical challenges. BHS was built in 1963, 37 years before the Americans with Disabilities Act (ADA) was passed. In a press conference earlier this month, Sarah Launderville of the Vermont Center for Independent Living expressed concern for the lack of ADA compliance at BHS. She said only one of the ramps are compliant with the act. The challenges posed are not news to BHS students with disabilities.

“Getting from place to place takes longer, just going up a bunch of stairs is more tiresome than the average person, even just walking takes more energy. It takes more energy to travel the same distance, to get to the same place,” senior Seamus Stein said in a previous interview with The Register.

To simply travel from one building to another, people who are unable to use stairs have to take an elaborate route. Junior Sonam Kelley was on crutches during her sophomore year, and she often altered her traditional path to classes.

“There are no elevators in C building or D building, so you have to go outside the school, into E building, then up the elevator, then back to the other buildings, and it’s the most inconvenient thing ever. [Also], the ramps are really steep, and they’re hard to get up,” Kelley said.

While BHS has taken small steps to improve accessibility, such as the installation of a new ramp in the lobby and a new handicap button outside the main entrance, a large part of the school remains in violation of the ADA.

On September 24, 2018, the Burlington City Council voted to take a step toward meeting the national standards set by the ADA over 20 years ago. They voted to ask citizens to approve $70 million worth of bonds for the “purpose of making capital improvements to the existing Burlington High School property,” on the ballot this November.

In 2014, a committee headed by former BHS principal Amy Mellencamp went to the city council, asking for a $200 million capital improvement bond to update all the buildings in the district. This plan was rejected due to the high expense, so the committee took a step back.

In 2017, Burlington citizens approved a $19 million capital bond that focused on smaller improvements to a greater number of schools in the district. This plan has since been enacted, with some setbacks, in other Burlington schools.

The BHS ReEnvisioning committee formed that same year, with the purpose of gaining community input on potential options for the renovation of BHS specifically. This April, the committee finalized a plan to put forth to voters in the November election.

According to the Owner’s Project Requirements, an official report used to judge the ability of the project to meet the needs of the district, the plan for the new building includes 115,000 square feet of new space surrounding A building and 164,000 square feet of renovation combined between BHS and Burlington Technical Center (BTC).

Currently, the square footage of the building is 249,000 square feet. After the renovation, there would be 280,000 square feet in the building. New windows, roof, exterior cladding, improved energy efficiency, upgraded systems, and improved building security are some additional elements of the proposed renovation. The goal is to meet ADA, Vermont Energy, and local building codes.

Emma Barker and Isabel Vivanco, juniors and members of the BHS environmental club, Leaders in Environmental Awareness and Protection (LEAP), say that there are environmental benefits to the remodel as well. Right now, the ramps in the building are not insulated very well, so a goal of the remodel is to improve the building’s thermal envelope.

“Even if you put an extra layer of glass in the ramps you could save a lot of money on energy efficiency. So I think it’s going to be not only environment saving, but also money saving in the long run,” Barker said.

Both agree that the environment should be a factor in the public’s decision.

“They should really consider it. It’s important, especially now when things are changing very drastically, Vivanco said. “Anything we can do to help limit our footprint is vital.”

If the bond is passed, property taxes will increase for homeowners in Burlington. At the peak of this increase, in fiscal year 2021, the average additional property tax for a $250,000 home would be $302, according to the Burlington Mayor’s office.

While many students see the need for a renovation, they share the concern of the Burlington community over the cost of these upgrades.

The report says BHS would become the first public school to be certified as a High-Performance School in the state.

Some students agree that BHS needs this bond, but are unsure of how the public will vote on Tuesday.

Still, others are keeping a sense of humor and hope about the vote.

“I think that our school is a good place that should be able to provide for people with different backgrounds and abilities, and I think that safety is number one. As long as I can make it to AP Gov in the mornings so Mr. Carney doesn’t mark me absent, then I’m good,” Mason Beck said.