Talking notes: A look inside BHS’s student-led a capella group 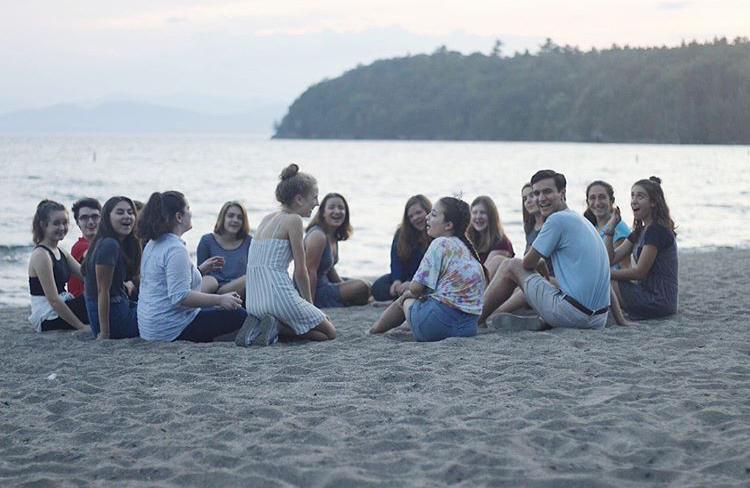 Every Wednesday afternoon, long after most students have trickled off of campus for the day, Burlington High School’s C-building swells with the sound of spontaneous vocal riffs, finger snaps and bursts of song. For two hours, Ms. Brock’s history classroom transforms into a music-making oasis for Burlington High School’s acapella group, The Burlingtones. The student-led group boasts talented vocalists from all four grade levels, all of whom were selected through a member-facilitated audition process that takes place annually in the fall.  Using only their voices, student leadership skills and collective dedication, they arrange song covers from a blend of genres to perform at their concerts, and at school and community events throughout the year.

“I joined Burlingtones at the start of my freshman year because I wanted to get a taste of arranging music on my own and experience being part of a totally student-oriented group,” Gabby Boera, a junior member, said.

Boera said she enjoys this independence.

“I like how we don’t have to rely on any adults.  We do everything ourselves, which is more rewarding than if a teacher or adult director was in charge.” Boera said.

The club is headed by Kathryn Turnbull, Emma Chaffee, and Alec Rutherford, BHS seniors. New senior co-leaders are appointed annually in the spring by the previous graduating leaders.

“Burlingtones isn’t exactly democratic,” Turnbull said when describing the process by which Burlingtones leaders are chosen.

The leaders are in charge of facilitating rehearsals, which are hosted two times per week throughout the school year.  The group practices for two hours at Burlington High School on Wednesday evenings and for two hours on Sunday mornings at one of the group members’ homes.

While the senior leaders keep rehearsals moving fluidly, the group says that everyone’s voice is honored during practices.

“I don’t get a sense of upperclassman superiority, which is great,” Mason said.

“If someone has a suggestion that could improve a piece, no matter if they are they’re a leader or not, their ideas are considered,” Emma Sutton, a senior member, said.

The Burlingtones honor a rule that, if any member of the club arranges a song, the group must perform it.  According to co-leader Turnbull, almost every Burlingtones member will arrange and teach at least one song  during their time in the club. While most songs are arranged by junior and senior members, underclassmen are encouraged to select and arrange songs as well.

Often, when a member arranges a song, they create a digital recording of every voice part using either Garageband or Soundtrap, which they then use to teach the song during rehearsal.  Other times, however, the group learns songs simply from memory.

“It’s really cool to see things come together from scratch,” Eamon Lynch, a senior member, said. “This is especially true when it comes to music because music is something that everyone can enjoy and get into.”

The Burlingtones’ independence requires them to be problem solvers, in regards to both their music and the structure of their organization.

“As a co-leader, I feel a lot of responsibility for any mishaps, both musically and structurally, as well as our success,” Turnbull said.

Sarah Montroll, a Burlingtones alumna who graduated from BHS in 2017, said she learned many skills from her time in the group.

“From my four years in the club, I learned that you could be the most amazing singer, but if you don’t know how to blend your voice and work with the group, it will still sound bad.”

The Burlingtones view their heightened responsibilities as a student-led organization as an asset to the club.

Boera, who hopes to become a senior co-leader next year, looks forward to the opportunities that the role might bring.

“I want to bring in underclassmen and teach them how to be independent, rather than [just] how to sing well,” Boera said. “Burlingtones is really an immersive and welcoming outlet for collaborative learning, and I want it to continue to be that way.”

The final Burlingtones concert of the year will take place on June 13th, at 7:00 P.M. at Main Street Landing. Entrance by donation. Check out the Register’s live stream of the 2017 Burlingtones Spring Concert here: https://www.facebook.com/BHSregister/videos/1415321901880826/hc_ref=ARRLsT1NLQPgu01PKqD4oGVrSFlnkzp7MpAYcaC89Vxl_yIK7OmfzHPVlraa14fpB1k