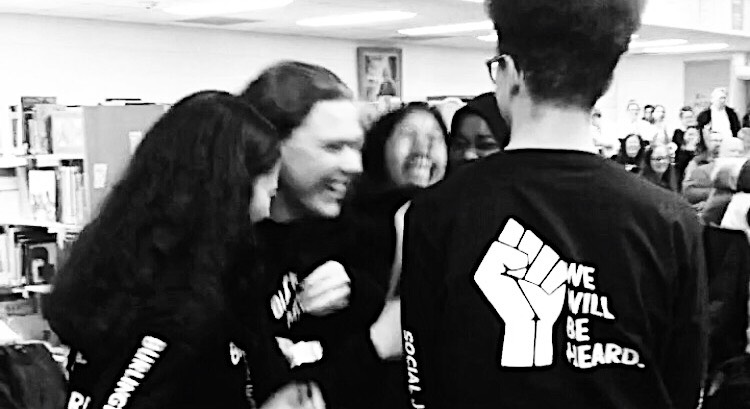 Members of the BHS Social Justice Union celebrate as the unanimous verdict to raise the flag is announced.

This past Tuesday, the Burlington school board voted unanimously to raise the flag after six members of the BHS Social Justice Union (SJU) stood in front of the school board, multiple news cameras and community members to speak in favor of raising the flag.

During public comment, Fran Brock, president of the Burlington Education Association, shared support for the SJU on behalf of Burlington teachers.

“Let me express our pride in the students who are here and will speak to you this evening. They demonstrate the strengths and success of Burlington’s schools. The board and community can be proud of these students and their impressive display of civic engagement,” Brock said.

Soon after, members of the SJU presented their proposal to raise the Black Lives Matter flag every February at BHS.

Prior to the meeting, Adam said she felt that this issue has been ignored for too long.

“It’s great that Montpelier was able to take a step forward and show us what’s possible, but I think really the fact that they had to do it for us to start this conversation is unbelievable and ridiculous. Because we claim ourselves as a diverse community and we say all these things, but behind that is the statistics and the situations that are going on in terms of graduation gaps, in terms of just the access and equality that students of color are not receiving,” Adam said.

She also spoke about the backlash that the SJU might receive.

“I mean, you’re going to get backlash with any movement. We’ve already kind of got that sort of tension, I guess. But that doesn’t mean that we’re going to stop,” Adam said. “That doesn’t mean that this necessarily ends right now because we received a couple of comments or people have differing opinions because we know what we’re fighting for, we know who we’re fighting for.”

Just a week earlier, when the BLM flag was raised in Montpelier, Dr. Brian G. Ricca, the superintendent of Montpelier schools, said he felt some backlash, to which he referred to as limited hate.

“I’m a white, heterosexual, cis-gendered, able-bodied, Judeo-Christian male who is also the superintendent of schools. So, I have a substantial amount of positional power and privilege,” Ricca said. “So while I’m acknowledging that there was some hate that was directed at me, the reason I’m using the word “limited” is because, as my wife pointed out to me in a conversation that we had when this was surfacing, this hate directed towards me is going to pass at some point. This hate that I’m glimpsing is what our students of color and what our students that don’t have as many privileges as I have experience [every day].”

On a video of the school board meeting posted by the BHS Register, commenters shared concerns about backlash, as well as concerns about the possibility of creating a public forum if a BLM flag is raised at BHS.

“I know this will be unpopular, and I support BLM, but a precedent has been set. You agree with BLM. What if a group wants to fly a pro-life flag? What would the arguments be to oppose it?,” Julie Hansen wrote in a comment. “Or an Alliance for America flag — they are an anti-environmental protection group. Maybe that would be a good thing — fly all the flags. I don’t know. I have an uneasy feeling about this.”

The Burlington school board predicted these concerns and asked local lawyer Joseph E. McNeil to give his legal opinion on the possible implications of flying a BLM flag on a Burlington School district flag pole.

“A concern was at least raised as to whether voting in favor of a motion to raise this flag would cause the flagpole to become a public forum and thus subject to the whim of any other person at their own choice to fly whatever flag they wanted, let’s say a Nazi swastika for example,” McNeil said at the meeting. “The answer is no. It would not.”

McNeil cited the difference between public, governmental, and private speech as the reason that the flagpole would not become a public forum.

“The consent given to fly the Black Lives Matter flag would not, in our opinion, cause the high school to become a public forum. It would still be under the governmental control of the administrators and board of the school district,” McNeil said. “So, permission granting this motion would be no different than a decision made by the BHS principal to offer a course in the civil rights movement as opposed to the development of Nazism, or to make any other type of choice of including one thing and excluding the other.”

Before the board voted, commissioner Mark Porter said he wanted to have more discussion about the issue.

“I want us to just discuss. […] Asian American heritage month is May. We have gay [and] lesbian pride coming up in June. We have Hispanic in September? July? We have National Women’s history month, right? So I don’t mean to in any way dilute what they’ve done,” Porter said. “I just want to make sure that in deference to other people, other students, that we also give them the opportunity to be student-centered, to drive what the school wants to do and when it comes down to other groups that they also have the opportunity to fly it with pride.”

Moments later the school board voted unanimously to raise the flag. Members of the Social Justice Union stood and cheered, hugging each other and receiving a standing ovation from the community members present.

“I’m really excited about our students and I commend them for the work that they’ve done. It was really great to see them engaged with their peers and then come through the board process, it’s not an easy thing, they’ve done a lot better than many of us adults have been able to navigate through the system,” Yaw Obeng, the superintendent of Burlington schools said after the decision was made. “So, I’m proud to see them looking forward to the ceremony so we can cheer them on. I hope this is an inspiration for our elementary [and] middle school students to know that when they come to Burlington High School there’s an opportunity for dynamic critical thinking and social justice.”

Eliza Abedi, a Burlington senior that spoke with the SJU, said she is overjoyed with the board’s vote.

“I was filled with so much excitement and happiness. Going in I didn’t really expect to get much pushback, but the process was still nerve-wracking to go through. Especially when Commissioner Porter started questioning how other kids would feel about the flag going up. Once the vote passed, however, I just felt a huge wave of relief. On Monday I’m most excited for the flag to finally be up and flying,” Abedi said.