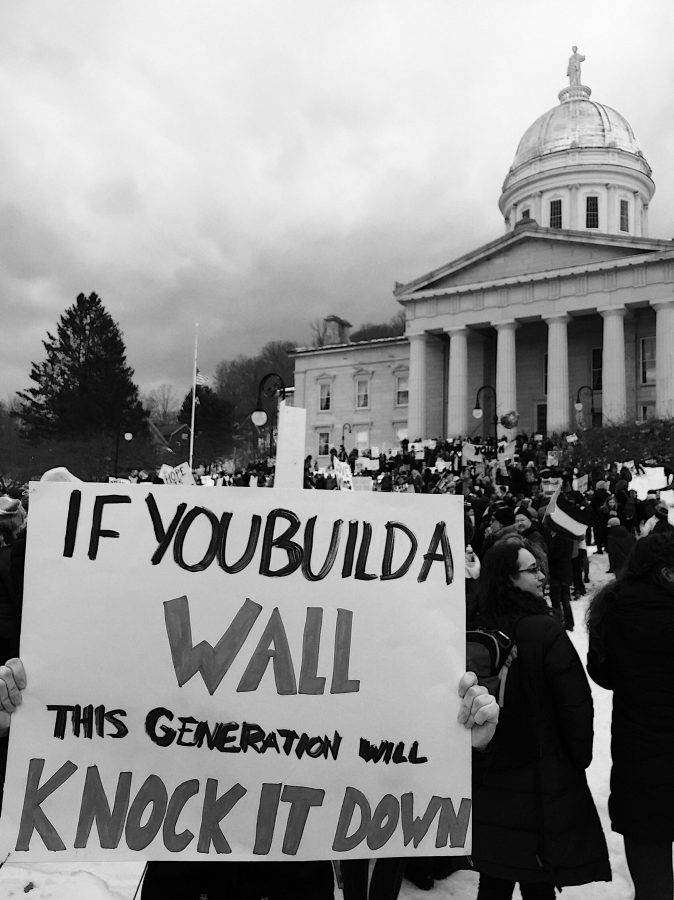 Youth march for their future in Montpelier on Jan. 20

The internet is flooded with stereotypes about Millennials, those born between 1980 and 1995. Multitudinous articles lament their selfishness, obsession with technology, laziness, and dependency on their parents. The next generation, however, seems to be much more engaged in the world.

Generation Z is the generation after the Millennials and accounts for the current Burlington High School (BHS) student body. This generation was born starting around 1996.

A 2017 study done by Cone Communications, a public relations and marketing company, analyzes some key traits about it’s members.  It turns out Generation Z is independent, realistic, competitive, and globally minded with a tendency to be more financially responsible than the previous generation. Another common trend in their data shows that Generation Z is becoming increasingly more invested in social justice and activism than past generations were at a younger age.

It seems Burlington High School students are ready to change the world.  In a December 2017 Register survey of 291 BHS students, 84.4 percent of respondents reported that making a difference in the world is important. At the 2018 March For Our Future, a youth led march in Montpelier, there was strong BHS representation.

“I think a lot of pressure is also put on us to strive for better and push forward,” Greta Gibson, a freshman at BHS, said.

Gibson says she has heard this sentiment from multiple adults before. Charlie McConnell, another BHS freshman, has been told his generation has a responsibility as well, and agrees.

“Our [generation’s role] is to fix the mistakes of the past generations,” McConnell said.

Chaim Lodish, a BHS math teacher and Generation X member, says resistance is a universal trait in all adolescents.

“Seneca says nature can’t reveal all of the secrets at once,” Lodish said. “Every generation has problems to solve. The problems will be unique to your generation.”

Arguably, as every generation comes of age, they believe the burden to fix the mistakes of the past falls on their generation alone.  Generation Z is no exception; yet this generation seems to actually care enough to get it done.

92 percent of the 1000 Generation Z respondents of the Cone Communications study said they care about environmental and social issues, and believe that these issues are not being handled well. They were born at the start of the War on Terror and have grown up during the Great Recession which began in 2007, when almost 8.7 million jobs were lost.

Generation Z will also be America’s last generation with a white majority.  Diversity, Division, Discrimination: The State of Young America, a study of over 2,000 Americans ages 15 to 24 by Public Religion Research Institute and MTV reveals that 49 percent of the respondents have tried to intervene when witnessing an act of discrimination.

Mr. Yu, a millennial, teaches the Spotlighting Justice class at BHS. He sees a major difference both in and out of the classroom from when he was a student to now.

“It’s clear how the rhetoric and the narrative has changed overtime and in between generations. When I’m teaching [Gen Z students] about this stuff, it’s clear that not everybody, but a good amount of people have been exposed to this material before, through either other teachings when they were younger or from their parents,” Yu said. “I think that’s a big part that [this] generation seems to be aware, because as a people we seem to be progressing.”

John Mazuzan, a BHS art teacher and member of the Baby Boomer generation, sees parallels between social justice in his youth and today.

“I was in school at the height of the protest in Vietnam, and really at the height of the time when the protests were really turning the tide in terms of public opinion. […] It’s similar to today in that there is a government who a lot of people believe is secretive and not forthcoming,” Mazuzan said. “So I do think there’s a great deal of responsibility being placed on the young people of today. And that’s why I think I see more of these protests and movements. And you [Generation Z] have the advantage of platforms, like instant communication.”

As the first true digital natives, Generation Z has grown up in a world with constant and unlimited access to new information, much of it exposing the injustices of the world.

“I think the biggest difference [between Generation Z and other generations] would probably be exposure to social media and also easy access to news,” McConnell said. “Through social media and news we are more informed. Therefore, we can be more involved in things that are going on like politics and national issues.”

McConnell keeps up with the news through multiple digital sources. He mostly uses the news app on iPhones and Snapchat. According to the Cone Communications study, Generation Z not only gets their information from social media, but spreads it there as well. This demographic is more inclined to advocate through social media than march through physical protests like past generations.

“We’re kind of reinventing activism in new ways other than just doing picket lines and stuff like that,” McConnell said. “Since we’re a younger generation, I think that’s the only way we can get people to listen to us. A lot of people in Generation Z can’t even vote yet, and it’s also hard to get through to government representatives. I think we’re using a platform that we’re able to use because we can’t use a lot of other platforms. I think people can take [Generation Z] seriously if we’re using social media.”

Kate Healy, an a BHS art teacher and Millennial who prefers to go by Generation Y,  understands McConnell’s stance on this.

“I take Generation Z seriously, but from the discussions that I’ve had with many of my students, I can tell that they don’t think that they are taken seriously by older people, especially their parents,” Healy said. “I assume that there are many adolescents today feeling that they literally have the weight of the world on their shoulders.”

Lodish, on the other hand, does not see social media as an effective platform for making change. He cited physical protests, such as the Women’s March and the Burlington School District strike, as a better way to make a difference.

“I think social media is garbage for that [advocating for a cause],” Lodish said. “I don’t think it’s a good thing to substitute walking, and showing and being present, [for] a mindless click.”

“The internet doesn’t exist. The internet is not real”, Lodish said. “Talk is cheap. What’s the difference between talk and action? […] Let me see your action rather than your talk.”

Mazuzan sees both the pros and cons of using social media to promote change..

“I see these [cell phones] as a double edged sword. I see these as an incredible communication device, and I also see them as an incredible time sink and distraction,” Mazuzan said. “I think [social media] is great and it gives more people a voice, and more people hear thoughts and ideas. But then the responsibility again falls to you as a young reader or young consumer of information to be more discriminant about what the information really is saying.”

Information is the root of social activism. According to Diversity, Division, Discrimination: The State of Young America, 55% of female participants cite a lack of knowledge about an issue as a reason they would not become involved. Luckily, because of technology, Generation Z has a world of information ready to be explored at their fingertips.

Zanevia Wilcox, a BHS junior,  believes that social media could be doing a better job of spreading information.

“The best way [to make social media more effective] is always keeping it relevant,” Wilcox said. “A lot of people don’t go out seeking what they see as negativity […] but I think the best way is to have it as a constant reminder.”

Wilcox says social media needs to be a more consistent outlet for sharing news. It needs to be present on social media where young people are already browsing. To Wilcox, this is a more efficient way of informing Generation Z. She does not believe that most Generation Z members will seek out news by themselves; it needs to come to them.

“You need to keep spreading [an issue] constantly because it’s something that is happening constantly,” Wilcox said