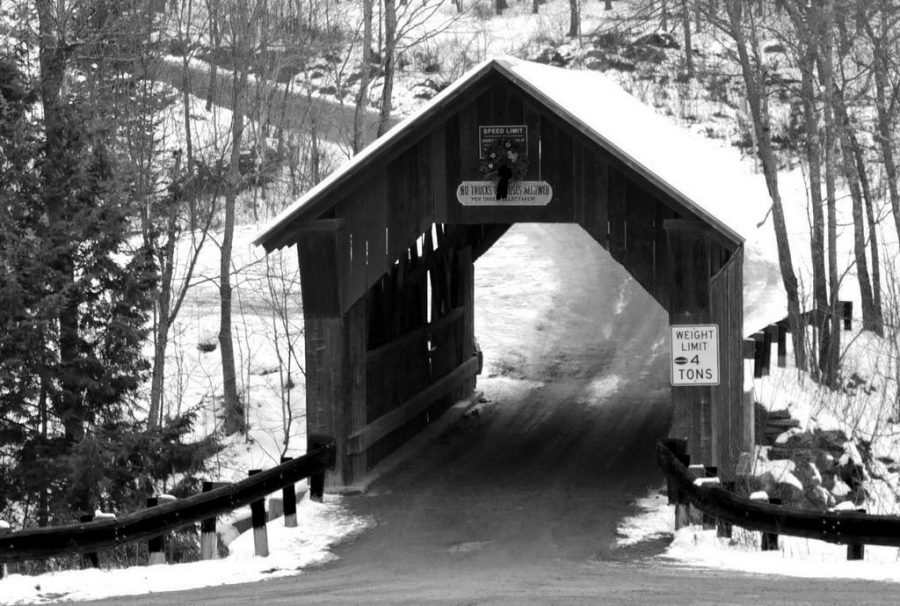 Zoe Koeninger, a Burlington High School (BHS) Junior, was an eighth grader in Toledo, Ohio when she believes she saw a ghost. She practiced theater in the Collingwood Arts Center, a building that formerly served as a convent, school, psych ward, and, according to local lore, possibly held cult worships. Koeninger said it is known as one of the most haunted buildings in Toledo, so students who spent their days rehearsing in its halls were curious and often explored…

“In between class and rehearsal we had about two hours and so we would get lunch and then we would like poke around the building and look for ghosts cause we were dumb kids,” Koeninger said.

During her explorations, Koeninger discovered a metal door without a handle that supposedly led to the old psych ward.

“So one day I decided to take a picture through the door and that’s what I got,” Koeninger said.

The photo seems to show an amorphous white figure in the hallway behind the metal door. The figure appears to be a reflection of someone standing near the door.

“None of us were wearing white and it wasn’t directly across from the window. I think it’s quite possible it could be a ghost,” Koeninger said.

While Koeninger explains this phenomenon through the presence of a spirit, others, such as BHS Assistant Principal, Herb Perez, choose to look at paranormal activity scientifically.

In the late 1980’s, Perez worked in a graveyard in Weybridge, Vermont. He did what he refers to as “perpetual care” which means maintaining the grave sites, mowing the lawn, blowing leaves, and filling in sinkholes.

According to Perez, there are many natural aspects of a graveyard that come off as creepy, but can be easily explained. For example, squirrels running around or debris rolling across the grass can startle people. However, even with his scientific mindset, Perez was unable to brush off one encounter he had while working an evening shift.

“The only time I got a little freaked out was, I was told there [were] a couple of ‘visitors’ that would drop by. One was a girl who died sometime in the middle of the 19th century,” Perez said.

Eyewitnesses who had seen the girl, who was given the name Amy, claimed she was in her burial clothes. She was most commonly seen in the older part of the cemetery. This is where Perez believes he saw the profile of Amy from about 30 feet away.

“Basically the side of her face, [shoulder] , and the back of her leg, like walking behind the stones. Maybe three seconds, tops, and vanished,” Perez said.

A 2015 Clarkson University study found these sightings to often be hallucinations from exposure to the toxic chemicals that are present in graveyards, as well as from fungal spores typically found in older buildings. Perez uses the fact that it was dusk to explain his vision.

“All this weird stuff happens. Biologically it’s because [of] the lights, less light, you’re tired, so your mind’s like, ‘get me out of here’. You start talking about who it could be, what century it’s from, all that kind of stuff, and your imagination starts to flow. Then you add fatigue, lower light, and the desire to go home, and humans like being scared – it’s fun. You wonder how much it influences what you’re seeing, so I try to be scientific about this stuff,” Perez said.

Many Burlington locales claim to have experienced ongoing paranormal activity. One Burlington business that is rumored to have had some otherworldly experiences is American Flatbread, a local pizza restaurant. Staff members say that there used to be a set of underground tunnels in Burlington, and some of these tunnels connected in the basement of Flatbread. The story goes that a person died down there, and while ghost sightings are uncommon, many workers explain things randomly fall off shelves or doors slamming shut as evidence of a haunting.

Other “haunted” Burlington buildings include Bittersweet House, home of the University of Vermont (UVM) Environmental Studies program. Employees of the program have come to terms with the existence of a ghost named Margaret (Daisy) Smith who is a past owner of the house. Daisy is described as a tall woman wearing classic Victorian clothing.

Richard Paradis, UVM Natural Areas Center Director, reports having “felt her presence” in his former office near the attic door. Every once in awhile, the door to the attic opened and closed on its own.

“You could probably explain it someway, but I thought it was unusual,” Paradis said.

While Paradis has not seen Daisy, he tells the story of a receptionist at Bittersweet a few years ago who was leaving out the front door one day when she felt a cold chill come over her.

She looked behind her up at the staircase, and, at the top of the stairs, she claims to have seen Daisy slowly waving at her.