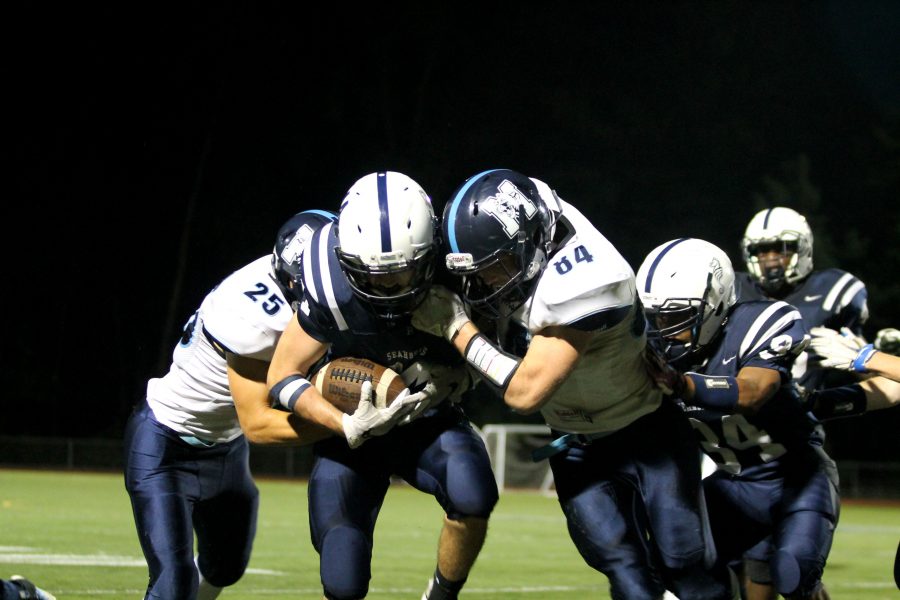 Fast and talented. These were the words Marty Richards, head coach of Mount Mansfield Union (MMU), used to describe the Burlington High School (BHS) Football team after the MMU Cougars upset BHS in the quarterfinal match.

“Their speed was a huge challenge for us. They are by far the fastest team we have played. Their speed challenged our offense and our line struggled with their stunts,” Richards said.

Although the MMU offensive line struggled, 21 points was enough for the Cougar defense to hold on for the win.  After putting up 42 points against MMU in an early-season meeting, the BHS offense was plagued by turnovers and a lack of execution.  The MMU defensive plan to lock down BHS running backs Kevin Garrison and Manny Dodson succeeded, aided by a third quarter injury sustained by Garrison.

This Cougar-orchestrated upset was a tough and unexpected blow for the ‘Horses. According to the Burlington Free Press, MMU is the only #6 seed to win a quarterfinal game since the original playoff format expansion.

The matchup was a nail-biter as the ‘Horses and Cougars waged a defensive battle for four quarters.   BHS closed the gap to five points with only a few minutes left on the clock and one final possession to win the game. The ‘Horses hopes were dashed by a game sealing interception, but Coach Richards had high praise for the effort.

“I was really impressed with how gritty BHS was and how they never gave up,” said Richards.

Despite the early playoff loss, the 2017 football season was one to remember.  After finishing last year’s season as a D2 school, BHS made the jump to D1 this year.  Despite the higher level of competition, Burlington defied expectations. They boasted a 7-1 record, and clinched their first D1 home playoff game in since 1989. Led by captains Ryan Mitchell, Kevin Garrison, Brody Snow and Gunnar Bierbaum, the Seahorses dominated their regular season schedule. Seahorse Head Coach Brennan Carney said that teamwork was the key to having offensive firepower, but that he was especially proud of his ferocious defensive unit this year.

“Everyone likes to talk about offense, but our defense is what has really set the tone. Causing turnovers, playing well, getting stops, tackling well,” said Carney.

Senior captain Ryan Mitchell agrees that the BHS offense thrived because of its well balanced nature, and that their defense was successful because of its chemistry and aggression. However, Mitchell believes there was also something more behind this season’s breakout success.

“It’s been different for me because I knew that it was my last time playing football, so I went out and played harder because I knew I wouldn’t be able to play again,” Mitchell said.

For such a senior heavy team, Mitchell thinks this last stand mentality could’ve been a major motivating factor.

Looking ahead to next year, Burlington will be losing a good chunk of its veteran players, but Ryan Mitchell has no concerns about the future of the program.

“I expect that Coach Carney will have the same attitude going into next season, and the coaches won’t change anything, because they want to win. That’s their big goal, and they know what it takes,” Mitchell said.

Key returning players such as Tenzin Kelly and Manny Dodson remain to anchor the team and are ready to support the upcoming Junior Varsity talent. Lead by an experienced head coach in Carney, Burlington’s complimentary coaching staff and young athletes should have no trouble continuing to build on the new legacy of Seahorse Football that was born this year.