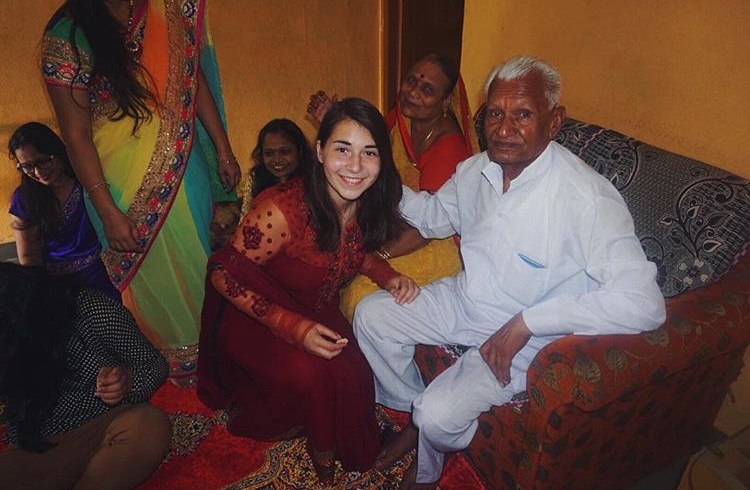 One of the five graduation expectations (GX) that all Burlington High School (BHS) students must meet before moving beyond the realm of high school is built around cross-cultural understanding and civic engagement.

According to the BHS student handbook, students will, “Actively seek to learn about and understand peoples, cultures, and perspectives and engage in the life of the community and the greater world.”

Every year, a few students at BHS have taken the initiative to push themselves beyond the comfort of their own country. They are doing their part in becoming greater global citizens.

Ali Javed Afridi, a BHS sophomore, came from Peshawar, Pakistan near the end of August. He is a fifteen-year-old who decided to come to the United States after hearing about the large number of Americans who consider Pakistan and Afghanistan to be a real threat to the world.

“In my school I heard many of my friends talking about this scholarship and [about] representing Pakistan in different states [in the] USA. I thought, ‘there couldn’t be a better chance than this to be an ambassador for Pakistan’,” Javed Afridi said.

The scholarship that Javed Afridi referred to is the Kennedy-Lugar Exchange and Study Program, which is available to secondary school students from countries with high Muslim populations. This scholarship allows students to spend one academic year in the United States.

Junior Diego Paroli arrived from Laveno, Italy on Friday, Sept. 15. Paroli was coming off of a fun-filled summer with his friends that he said made him question his decision to leave.

Along with students coming to Burlington from other countries, BHS has students who have chosen to experience the world outside of America. Senior Zoe Moskowitz traveled to India for the entire 2016-17 school year in order to better prepare herself for a career in international relations.

“I feel like the only way to truly learn a language is through immersion,” Moskowitz said.

Moskowitz chose Hindi out of seven different language immersion options offered through the NSLI-Y scholarship; a scholarship provided by U.S. Department of State for high school students interested in learning less commonly taught languages. While in India, Moskowitz attended an English-speaking school where she learned Hindi from a local teacher.

“You get the immersion aspect and the classroom learning aspect together,” Moskowitz said. “It wasn’t like I was speaking Hindi the whole time.”

Paroli has faced both challenges and pleasant surprises when it comes to learning English. After studying the language for ten years in Italy, listening to and understanding English speakers here has been easy.

“It’s more difficult speaking because if someone asks you a question and maybe you don’t have the answer it’s difficult to phrase it in the right way,” Paroli said.

In addition to a language, exchange students have to adapt to an exotic culture.  The strong presence of American media and film greatly influenced Javed Afridi’s expectations of school in America.

Moskowitz had a similar experience when it came to her assumptions about poverty in India.

“It’s not as prevalent as people imagine it to be. There’s also a decent class of wealthy people, and I don’t think you hear about that,” Moskowitz said.

Moskowitz expounded upon the difference of surface culture versus deep culture, the latter of which she believes to have had a more dramatic effect on her day-to-day life. Her understanding of this underlying culture in a society comes from first-hand experience.

“The timing, how the society runs, organization, like things that make up a lifestyle in a society. That’s really different,” Moskowitz said.

Moskowitz has been a TA in an English Learner class since freshman year. Since the return from her trip, Moskowitz has been able to use Hindi to help teach some of the Nepalese students in her class who are also familiar in the language, and she plans on taking this a step further in the future.

“[…]I would really like to go back and work in a girls home, boys home, or a school where I could actually use my Hindi to help them learn English or just be able to make new connections and learn about people that I wouldn’t have been able to if I didn’t speak the language,” Moskowitz said.

Paroli, whose shy tendencies have made it difficult for him to branch out in the past, hopes that this experience will make it easier for him in the future.

“I would like to improve my personality, like to be less shy or be more open to other things that usually I wouldn’t have done,” Paroli said.

Javed Afridi has chosen to focus more on the firsts.

“I want to say to myself that I tried new things,” Javed Afridi said. “I’ll never forget that I played frisbee, walked in these halls, [biked].. I biked before in Pakistan, but it was never as good as here. The feeling of the wind on the lake. You just sit down at the shore and look at the sunset.”

These students have brought themselves one step closer to understanding how they fit into the wider world of many differing nations. Their engagement in cross-cultural experiences will help to broaden their ideas and views. Whether it be as international liaisons or simply people making business deals, having lived in a foreign area and learned a new language gives exchange students skills that can be used to their advantage. Most notably, going abroad gives teenagers a taste of how the world runs outside of the small area they are familiar with.