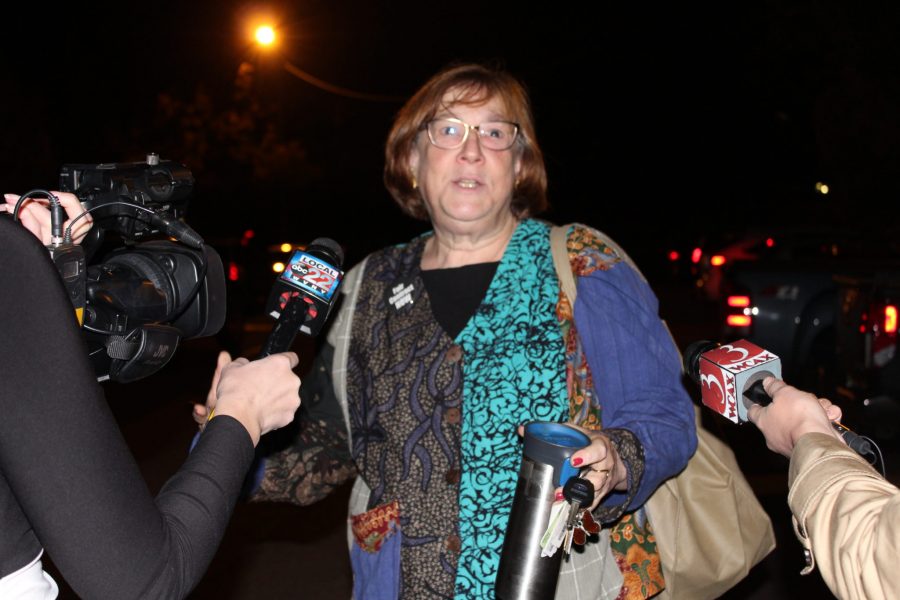 BEA President Fran Brock addresses the media after reaching a tentative agreement with the Burlington School Board in October, 2016. | Photo: Alexandre Silberman/Register

Editor’s Note: This story has been updated to include new data and information released by the Burlington School District on Tuesday.

7.8 percent of teachers will not be returning to the district for the next academic year, according to a May 30 statement by the Burlington School District. The number, which is based on full-time union positions, includes 19 retirees and 12 resignations.

Concerns had been raised earlier after the district contract renewal list was released prior to a May 9 school board meeting. Forty percent of employees at that time had not submitted a letter of renewal, according to Burlington Education Association President Fran Brock. Brock said she received the numbers from the human resources department prior to the meeting.

In a May 16 interview, Brock said she found the original numbers concerning. In 24 years as a teacher at Burlington High School, she has only seen two years that compare to this one. One of the two was a peak year for retirees, and the other was when the district offered a retirement buyout for senior teachers.

233 teachers and administrations were listed as up for renewal in the board’s consent agenda, available through the district website. The board confirms letters of intent in two batches, and will receive the second list, which is not currently available, on June 13.

The district released a statement on May 30, calling prior turnover rates projections “inaccurate.” The statement claims that the delay in contract renewals is due to the workflow volume that human resources staff have to process.

Brock said that teachers leaving the district has been a developing problem for several years.

“We’ve been seeing a higher number of folks quitting, or going to other schools districts,” she said.

Educators are also deciding to leave the profession entirely, which impacts the school climate. A study by the National Center for Education Statistics showed that 17 percent of teachers nationwide left the profession after five years.

In a response to public records request by the Register, Superintendent Yaw Obeng said that a list of teachers that have left the district to work in other districts for the past five years did not exist. The district released in a statement on Tuesday that at the end of the 2015-16 school year, nine teachers did not return due to resignation, and seven due to retirement.

“I find it very discouraging,” Brock said. “It dampens spirits and affects morale of the teachers still working here.”

She considers the climate established in Burlington schools to be a major cause of the problem, and thinks the school board should be concerned.

“If you have a school that employees are facing with dread, I think you have a culture issue that needs to be addressed,” Brock said.

The BEA has conducted three teacher surveys around climate and culture in the past two years, but declined to release the results due to concerns about impacting current contract negotiations.

The teachers’ union and school board declared impasse on March 19, and met with a mediator in April to help move talks forward. The two sides have yet to come to an agreement.

The Register obtained a copy of an itemized list of expenses for teacher contract negotiations through filing a public records request.

The district has spent a total of $51,000 on negotiations to date, according to the list provided by Superintendent Yaw Obeng. The breakdown includes $33,437 in attorney fees, in addition to $17,564 for consultants. The district spent $88,863 for fiscal year 2017 negotiations.

It was unclear at the time of original publication of this article if the district’s human resources department conducts exit interviews. Nikki Fuller, the department’s director, did not respond to multiple requests for comment. Brock said that the district has conducted interviews from time to time in the past, but not consistently.

The district clarified their use of exit interviews in the statement on Tuesday.

“All employees separating from employment from the District are offered a voluntary exit interview. These interviews are confidential and performed in-person with HR staff. The District does not ask, or track if voluntarily provided, where employees leaving the District are going to work next,” the statement reads.

East District School Board Member Kathy Olwell was confused when she received the consent agenda, which included contracts up for renewal, prior to the May 9 meeting.

“I noticed that there were a lot [of names] missing, and I called and asked what was going on,” she said.

Olwell believes the board is not connected personnel-wise to the schools, and is frustrated with the lack of information under the new policy governance structure. Policy governance, which the board adopted this spring, is a leadership model which defines relationships between board members and the superintendent.

“I would like to hear from Yaw [Obeng], why it is that all these teachers are leaving,” she said.

“I didn’t get on the board to be a rubber stamp.”

Olwell strongly supports the practice of exit interviews, regardless of the number of teachers leaving the district. She said that the feedback is beneficial for the superintendent and principals.