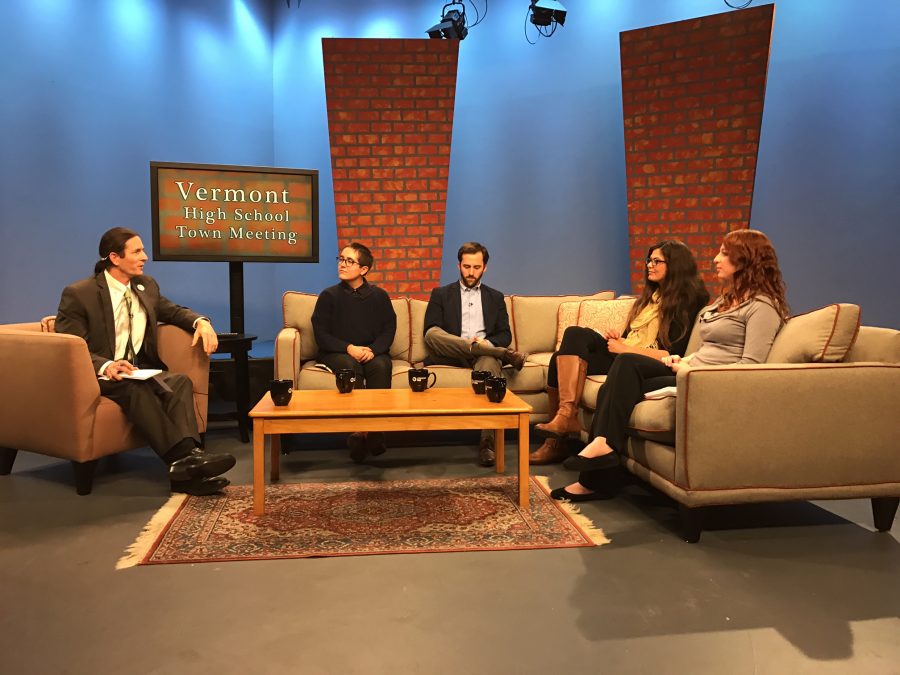 The Progressive politician moderated a panel of four young Vermonters, while students from around the state asked questions in person or via social media.

The Lt. Governor said that he hopes that the program will show peer role models.

“Sometimes young people do feel disconnected from civic engagement, and don’t realize, it’s right there for you,” Zuckerman said in an interview after the show.

The first term elected official began by telling the panel about his early start in politics. He recalled being inspired by the vision of Sen. Bernie Sanders (I-Vt.), after he came to speak when Zuckerman attended the University of Vermont. Just a few years later, at age 25, he ran for the Vermont House and won.

Several of the panel members were also motivated by Sanders to get involved, yet each had their own passion.

Alex Escaja-Heiss, a student at South Burlington High School talked about her work with LGBT rights. She has volunteered extensively with Outright Vermont, and started a gay-straight alliance club at her high school. She believes there are many opportunities for youth to get involved in the state, but does see challenges.

“If we have this mentality that’s [Vermont is] all accepting and open, it can be hard to have those difficult conversations,” she said.

Austin Davis, a recent UVM graduate, has been working to fight climate change. He appreciates the ease of access to elected officials.

“Because of the size of Vermont, it’s a lot easier to get involved and talk to people in power,” he said.

The conversation shifted to some of the challenges of getting involved, particularly in rural areas. Davis cited economic challenges and lack of high speed internet throughout the state.

Elise Greaves, the lead organizer at Rights and Democracy Vermont, stressed that one does not need to be an expert. She was instrumental in organizing the Women’s March on Montpelier, which drew thousands of people to the state house lawn.

“Don’t get caught up in what you think you don’t know,” she said.

The panelists wrapped up with closing thoughts and reflection on their work.

“I’ve been able to mix a lot of things that I love,” she said. “You don’t always consider that there’s so many ways to get involved and utilize the passions you have.”

Student: Climate change can be combatted at the local level. pic.twitter.com/WH1JhFlOdK

The Register caught up with Zuckerman in an interview after the program. He said that social media and the internet have led to disconnect among youth.

He cited economic opportunities, heroin and prescription drug addiction, as well as optimism around climate change and national politics, as the major issues facing youth in the state.

Zuckerman said he was torn about the lack of young representatives in the state house.

“On the one hand, I think having people making the decisions who have a little more life experience to reflect on is really valuable, but also having diversity is really helpful,” he said. “We’ve often had a few people in their twenties in the house.”

The Hinesburg farmer said young representatives would be important in starting conversations around issues like the cost of higher education.

“The more people are engaged, the more the decisions of policy makers are going to reflect what people want,” he said.