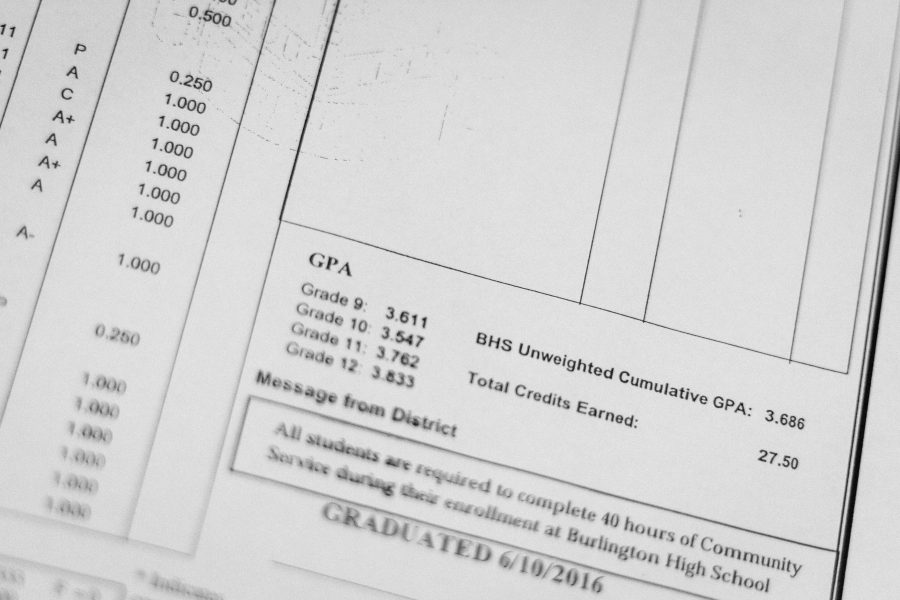 Senior Maddie Khamnei thinks GPA based graduation sashes divide students. She has proposed to administration the idea of having all students wear the same color sash. BHS currently does not weight GPA, as seen in the transcript above. | Photo: Jake Bucci/Register

This visual distinction between graduates has Khamnei asking how academic acknowledgement can celebrate success by singling out students and still create community. Khamnei believes the Latin system of designation is working more to split students into groups at graduation, rather than bringing them together to celebrate their success.

“You are so much more than a color of sash and so much more than your GPA,” Khamnei said. “The graduation ceremony is a celebration of your academic achievement; it’s not a competition. High school is really about preparing you for college and what comes after. People will say we can get past that and that it does not divide our grade, but at the end of the day, it really does because people show up and they see the different colors and they immediately judge.”

Khamnei will be receiving the gold sash for outstanding grades throughout her high school career, yet she feels the grading system is flawed and does not work.

Burlington High School has an unweighted grading system. Khamnei says it does not represent students academic rigor and achievement accurately. However, Khamnei would support GPA based sashes if and only if the school weighted GPAs.

“BHS doesn’t have a weighted GPA so at the end of the year we’re distinguishing kids by an unweighted GPA, which doesn’t really make sense if you think about it. Because the difficulty of the classes you take has no effect on your GPA, but in reality it should be taken into account because it’s harder to get better grades in these more difficult classes,” Khamnei said.

One has to read the transcript closely to understand the rigor of courses in relation to the GPA.

“The safeguard is supposed to be the course designation of honors versus college prep or standard.  Whoever looks at the transcript is expected to understand that one course is more challenging than another,” Fran Brock, History teacher and BHS graduate said.

Other schools choose to acknowledge their most successful scholars by using a ranking system, where students are ranked individually based on a weighted GPA. The first and second ranked students receive honors; they are called the Valedictorian and Salutatorian respectively.

“I don’t know that it matters about the weight as long as there is a way to distinguish.  If we have valedictorians et cetera, that is where weighting course becomes important. That is when ranking matters,” Brock said.

Khamnei believes that ranking students individually with weighted GPAs would be a better system for high schools because it is more accurate in portraying the course difficulty of each student’s curriculum. Regardless, she believes those rankings should not be the focus of high school.

Khamnei along with fellow BHS Seniors Ella Causer, Olivia Nadworny, Reeve Flynn, and Becca Berlind have reached out to administration concerning the removal of sashes from graduation and suggested replacing them with blank sashes which every graduate would receive.

However, Ella Causer has expressed the difficulty of changing something so integral to graduation especially since there is not a clear process for making changes to the graduation ceremony.

“I formed a panel and have been trying to communicate with admin but it has been a slow process. I have been working on this issue since November of this school year. In order to get this changed we need the support of a majority of students,” Causer said.

While this process may be long and complicated, many students are against it altogether. One of these students is Will Devitt, a senior at BHS who is opposed to the removal of graduation sashes.

“I think we should keep the sashes how they are, colored by GPA, because for many people they’ve worked really hard at school and they want to be able to show off their hard work. It’s an important tradition and I think it adds a lot to the ceremony and makes a lot of people feel good about themselves,” Devitt said.

Khamnei says that graduation is more about the focus of students’ experiences as BHS as a whole, rather than academic success.

“I think that BHS should shift its mindset completely so that your experience at BHS is about becoming a better person and being prepared for what’s next, rather than having the highest GPA or wearing the gold sash at graduation. The whole purpose of high school is about personal academic achievement not comparing people by things like GPA. What I am going to remember from my high school experience is my experience with the track and involvement with clubs. I am not going to remember my GPA,” Khamnei said.

These five BHS seniors have proposed an alternative idea to replace the GPA based sashes.They have proposed that all seniors receive blank sashes. They then are given a “Senior Decoration Day” in which senior students can come in and decorate their sashes how they like so that it represents their BHS experience in a personal way and gives them something symbolic to keep after graduation. This is something these students believe a GPA based sash can not do.
What Do Students Think?
The Register polled 85 seniors on GPA and the proposal: 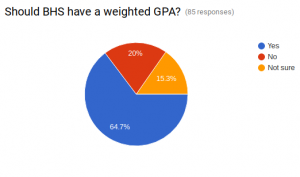