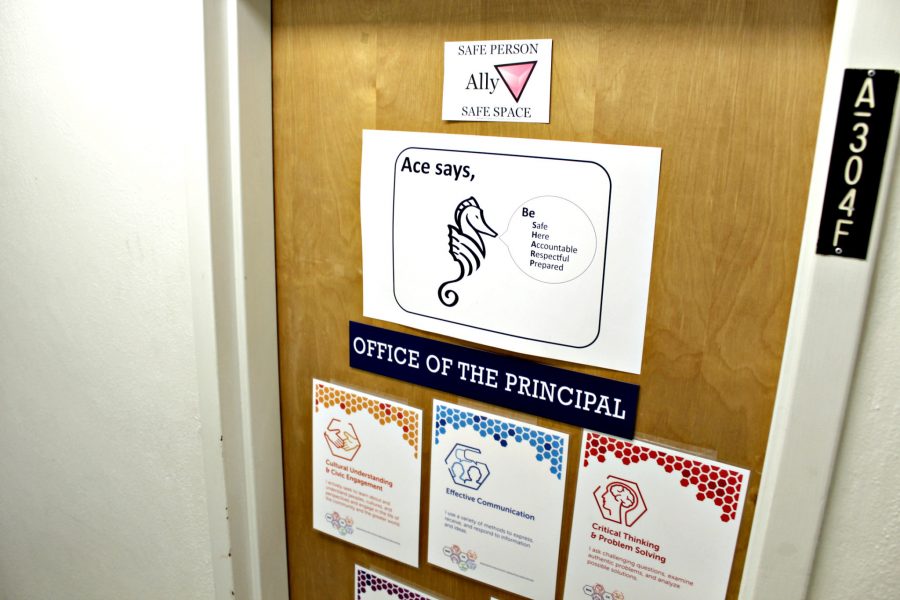 Obeng was involved in hiring a new principal at Champlain Elementary School in April 2016, after he had just recently begun his job in September. No parents or staff were present on the selection committee, and there was no session for community members to meet the final candidates.

As soon as the principal search was announced, the Champlain PTO asked the central office to have parents on the hiring committee. Multiple requests were denied.

The changes left PTO President Mike Fisher concerned that parent voice had been left out of the decision.

“Excluding staff and excluding parents sends the message that your input in evaluating people is not important,” he said.

The process began with requesting a school profile from the parent-teacher organization, according to Fisher, who has been involved with the group for five years. The document, obtained by the Register, includes qualities and skills sought in a new principal, as well as three pages of suggested interview questions.

The profile, which 30 families collaborated on, cited that the school has lacked strong leadership for close to ten years and has multiple infrastructure needs.

Finalists for the position were selected prior to when Obeng received the document, according to Fisher. Obeng and Human Resources Director Nikki Fuller did not respond to multiple requests for comment from the Register.

“I am highly confident that they did not make their finalist selections based on [the school profile] info,” he said.

The PTO was given the opportunity to speak with one of the three final candidates during a school tour. They were unable to meet with the other two finalists. Fisher feels that the brief length and public environment prevented parents from being able to ask meaningful interview questions.

“Our feedback about one of the candidates was only taken for about 30 seconds,” Fisher said, explaining how his group spoke to Obeng following the tour.

Champlain Elementary first began the process under Interim Superintendent Howard Smith and Fuller, after Leslie Columb retired in 2015. Parents and teachers were included on the hiring committee, and a session took place for community members to pose questions to the three finalists. These steps did not take place under Obeng, Fisher said.

Parents were unhappy with all three candidates the committee had selected, which prompted Smith to meet with the PTO. The decision was made to hire an interim head while searching for the ideal candidate. The district hired Maria Horton to serve as interim principal in 2015.

The Champlain PTO sent a letter to the superintendent in April 2016, expressing concerns over the hiring process as it was unfolding.

“We request that parents have an active and direct voice in assessing finalist candidates for the position of principal of Champlain,” the letter states. “We understand that you are ultimately responsible for the selection, hiring and performance of the principal. But we feel that absent the feedback of parents, you are making the selection without the input of key stakeholders and taxpayers who much vested in ensuring excellent leadership of our school.”

Obeng replied: “Thank you for your submission.”

Fisher believes that parents provide unique information on a school community, adding that Obeng had only been in the district for seven months at the time of the hiring process.

“I have experience with what type of leader works in our school, and the personality of our school,” he said.

The job ultimately went to current principal Dorinne Dorfman, whom the PTO has been pleased with.


Files Show Past Process
Flow charts and other hiring process documents obtaining by the Register from 2014 show the district had a thorough process for selecting new teachers under Smith’s leadership. The system included multiple committees for both interviewing and selection of finalists.

A school interviewing team, comprised of teachers, special educators and other members at the principal’s discretion, met with candidates. A district interviewing team was involved before the superintendent ultimately made suggestions to the board.

Amy Mellencamp, currently the principal at C.P. Smith Elementary School, began in the district as an interim principal at the high school in 1999. She recalls a formal job posting, and interviews involving a number of students and teachers. The process, which Mellencamp estimates lasted 3-4 weeks, ended with a parent forum.

She feels the process has become more standardized over the years.

“It asks for parent and community input, it just asks for it at a different stage of the process,” she said.

Stoll feels there is more accountability about using parent information under the new model.

Board Member Mark Barlow believes that community involvement under Superintendent Obeng is sometimes different than past practices. He accepts input, but ultimately administrative hires are his decision, Barlow said.

“At the end of the day, we need to feel that the Superintendent is respecting all of the stakeholders in the system when making important decisions.”

Helen Hossley is a former district parent and two-time school board candidate. She disapproves of the current process.

Assistant Principal Tom Fleury is leaving his position, which has prompted the start of the hiring process.

“We’re sad to see him go,” PTO Leader Rachel Shelley said. “He was a fantastic asset to our school.”

The PTO has yet to be asked to be involved in the process.

“I don’t think that they’ll be much parent input,” Shelley said.

Edmunds Elementary School last hired a principal six years ago according to Shelley. The process began with a parent meeting with district personnel to brainstorm what people would like to see in a principal. Parents were selected to be part of the search committee, which ultimately interviewed and hired Shelley Mathias

“I thought it was a great way of getting input from the parents and made us feel that our feedback was valued,” Shelley said.
Grievances Filed
The Burlington Administrators Association (BAA) attempted to file a grievance last year regarding the hiring of assistant principals at Hunt Middle School and the high school, according to Mellencamp. The positions were not posted and candidates were taken from a pool of candidates that had applying for an entirely different job. Mellencamp, who has worked in the district for 22 years, currently serves as co-president of the BAA.

“The schools involved never had a chance to meet the candidates or to understand their credentials,” Mellencamp said.

The administrators union issued a grievance, or formal complaint, regarding the process.

The grievance was denied due to the fact that it had been filed a day late. The BAA contract specifies that complaints must be sent in writing to the superintendent within a certain number of days.

The largest issue for the union was the decision not to post the positions to the website so a large-scale search could take place. Reduced involvement from key stakeholders was also a concern.

“Every school is different, and I think having the culture and needs of a particular school represented in the conversation, as you’re interviewing people, is where the benefit of a hiring committee comes from,” Mellencamp.

Principals were not involved in the hiring of assistant principals at the school where they work.
Area Schools Differ
Including community members in several steps of the hiring process is common in other Chittenden County school districts. South Burlington High School has interview committees comprised of parents, teachers and students, for all permanent teacher, varsity coaching and administrative positions, according to Principal Patrick Burke.

Performance assessments and site visits almost always take place, and committee members interview the candidates. South Burlington is currently hiring an activities director (an administrative level position) and has two parents and students on the committee.

“We require that students and parents sit on the hiring committee for all administrators,” Superintendent Amy Minor wrote in an email to the Register. “This means they have the same role as school district committee members, they review applicants, have a say in who we extend interviews to, develop interview questions and can attend site visits if we decide to do those.”

Colchester High School is currently hiring a new assistant principal, and the district sent the entire student body a survey asking for characteristics they would like to see in the hire.

Darren Allen is the communications director for the Vermont chapter of the National Education Association.

“We believe that education is a collaborative venture,” he said. “Including educators in the process leads to more effective results.”

There are no statewide standards for hiring administrators, but it is common for most schools to include educators in the process, according to Allen.

Nicole Mace, the executive director of the Vermont School Boards Association, did not respond to a request for comment regarding hiring practices.
Hiring From Within
The transfer of principals between schools has also been an issue for Fisher, the Champlain Elementary School parent. He believes the transfer of Amy Mellencamp to C.P. Smith Elementary School has created mistrust. Mellencamp had served as the principal at Burlington High School for 17 years, was set to retire in this year.

“I think that changing leadership needs to have an explanation, and I think his explanations at the time were insufficient,” he said.

Green said in a December interview that he plans to reapply for his position. At that time, no hiring process had begun, he said. Green did not respond to a request for comment regarding the current status of his position.

Racicot told the Register that she has received no notification of the hiring process beginning for her position.

The Burlington School District website did not publicly list any of the positions as of March 29, however a post by a BHS parent in the Support Our Burlington Schools Facebook group indicated that the process had commenced. The commenter wrote that she had received an email from the PTO, asking her to complete a BHS principal school profile.
BHS PTO parent volunteer Clare Wool confirmed in an email that she had been asked by Obeng to complete a “principal profile outline.” She said that the parent community has not been asked to be a part of the process, other than the document. Wool is concerned about the lack of transparency and communication a clear timeline.