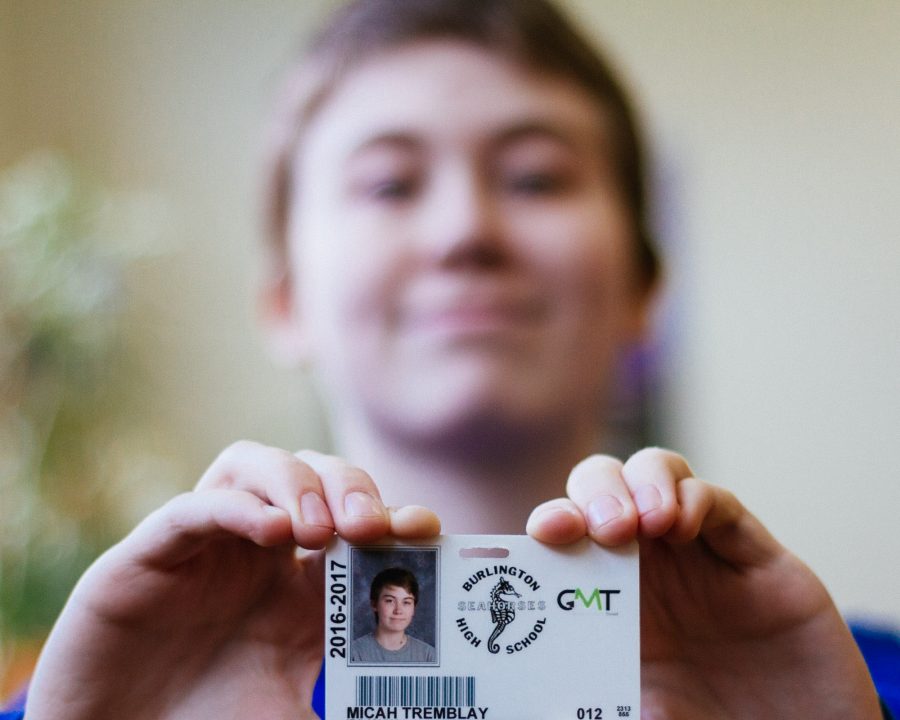 Students with a preferred name other than their legal name can not simply have their name changed in Powerschool, the system the Burlington School District uses to track student information.

“I’m able to change their names in the system, just it’s not legal. Student names on official school records must match their legal ones. This is to avoid any mix ups with sending information to colleges and to keep all legal information the same,” said Heather Sienkiewicz, who runs Powerschool for BHS. “I have had two or three students change their name in the system in the past two years, so it happens frequently.”

Sienkewicz says that there is a field for preferred name and gender on Powerschool; however, reports and teachers rosters don’t show the field for nickname so it’s not available to them, and the gender field has only male and female and can not be left blank.

Micah Tremblay, a BHS senior, identifies as a transgender male. The day after his eighteenth birthday, he went to the probate court to have his name legally changed to Micah Tremblay. Tremblay heard from Finley McNamara, class of 2016, a friend who also struggled with the system, that name changes affect all transactions including class rosters, transcripts, and college applications.

At this time, BSD Powerschool does not have the option to list both legal name and preferred name or preferred pronoun. This causes discomfort in the classroom for transgender students in particular who have to go through the process of legally changing their names in order to have Powerschool honor their identity.

“If the information has not been passed on than that can create very uncomfortable situations for a student who may already be struggling with feeling safe in the space,” said Nadya Bech-Conger, a history teacher. “It adds one more layer if what we really want for our student is to feel safe, comfortable and belonging.  It adds one more layer of otherness because everyone gets called by their name except you.”

Because students’ names are stored on attendance lists in Powerschool, it is the name of record called aloud for attendance. Initially, this causes conflict for both teachers and students and is one of the reasons Tremblay wanted to have his name changed legally. He had been identifying with his new name and gender ten months before it was legally changed.

“Usually I would tell teachers and students and they would respond saying that if that’s what I wanted to be called then that’s what they’ll call me,” he said. “The main problem was substitute teachers, because my old name was still on the attendance sheet. It was a little embarrassing, especially since some of these people I had met didn’t know me as what people had thought I was before.”

Another student with a name different from their birth name is Abel Claire Jordan, a BHS Junior. Jordan agrees with Tremblay on the subject of people calling them by their previous names.

“I do mind if a teacher in class calls me by Sunshine (his previous name), but only after they continue to do so despite me asking them to refer to me as Abel instead,” he said.

However, Jordan hasn’t gone to the lengths of changing his name legally, he rather only asks for people to address him by his preferred name.

“Personally I don’t really mind that certain forms of IDs don’t have my preferred name. The idea of being able to change what shows up on my ID and Powerschool has never actually occurred to me,” he said.

However, aligning documents with the truth is important to Tremblay.

“I actually had to apply [to colleges] with my old name since my name hadn’t been legally changed yet. I made it clear on the application that that was my legal name but that’s not what I go by and that I identify as a transgender male,” he said.

According to Tremblay, colleges do a decent job of providing options for genderqueer applicants to state their gender identity. Beginning in 2009 the University of Vermont’s record system, BANNER, allows students to indicate their preferred first name and pronoun regardless of whether or not it is legally changed. This indication automatically changes the name as it appears on class lists, grade reports and unofficial transcripts.

“Having preferred names and pronouns helps create a culture of acceptance. It would help on day one,” said Benjamin Roesch, a BHS English teacher.

Powerschool system flexibility would mean that from the first roll call, students can be who they are.