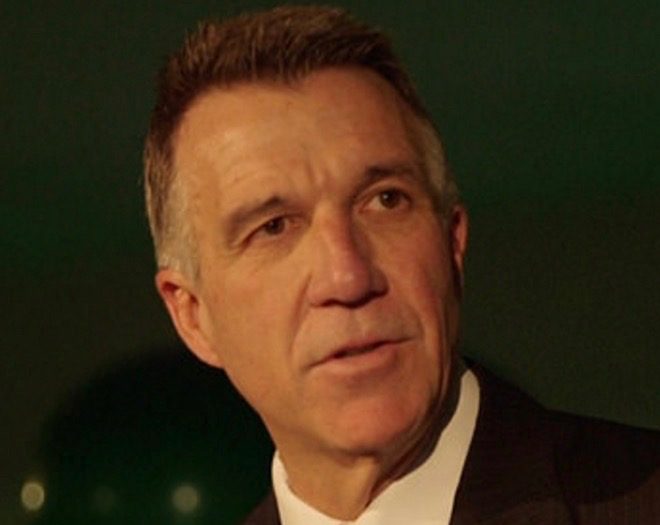 Vermont Gov. Phil Scott has yet to decide if he will sign a bill that would legalize marijuana. | Photo: Wikimedia

In an effort to eradicate a $75 million General Fund budget gap, Gov Scott has called for shifting the cost of higher education and the annual teachers retirement obligation from the General Fund to the Education Fund.  The remaining $40 million dollar general fund deficit be covered by cuts to human services and medicaid programming.  Scott’s official plan transfers millions of dollars from k-12 education funds to fund pre-k and post-secondary education.

Scott’s primary goal is to lower property taxes for community members, and increase the affordability of education in Vermont.

Many have serious concerns over the direct impact that Scott’s plan would have on local schools.  BSD superintendent Yaw Obeng states that, in order to comply with Gov Scott’s proposal, the district will need to cut $3,194,008 from the recently approved FY18 budget.  According to Obeng, cuts from FY18 would result in staff reductions in all schools.

Regardless, the proposal will affect the livelihood of all Vermont teachers. The plan stipulates that teachers pay 20% of their health care premiums, an average increase of 5%.  This 5% increase will reduce teachers’ take home pay if not offset by a comparable increase in salary.

Gov Scott’s budget proposal also jeopardizes small rural schools.  According to Susanne Young, the secretary of the Agency of Administration, the financial burdens that the plan will put on smaller schools will “very likely result in closings.”

These changes have received heavy backlash from community leaders and taxpayers alike.

“By freezing property tax rates, capping school budgets, firing hundreds of educators and seeking $15 million in pay cuts from educators, the governor will not achieve what we want: a top notch education for our children,” Martha Allen, president of the VT-NEA said.

“It is irresponsible to increase the liability of this fund or to shift the liability on to the backs of hard-working Vermont teachers. We want to create a strong, healthy future for the next generation. I’m not convinced that this is the best way to accomplish that goal,” Johnson stated in a recent press release.

Nicole Twohig, a parent of a Champlain Elementary school third grader, believes that Scott’s proposal fails to consider all Vermonters.

“I think that it will hit Burlington the hardest because we have a larger, more diverse population,” Twohig said.  “It needs to be recognized that Vermont is not an all-white state.”

Twohig claims that the Scott Administration needs to stop viewing all Vermont schools through a homogeneous lens, and thus cutting programs and teachers that are vital to nurturing Burlington’s diversity.

Scott’s attempt to lower property taxes has been lauded.  Supporters agree it is essential for taxes to come down, although some question the logistics of Scott’s proposal.

Burlington representative Kurt Wright supports the effort to address property taxes but believes that Burlington will struggle to meet the terms of Scott’s plan.

Scott responded optimistically to his critics.  “I’m not asking school districts for anything more than what I’ve asked from state government,” Scott said.  “For our economic security, we need to clear the way to get our economy moving and growing again.”